iTunes Is Now Preparing a ‘Beyoncé-Esque’ Exclusive for Mariah Carey…

Update, Monday, 8:55 am PCT: Billboard now says their report might be completely inaccurate, based on conflicting details from Carey’s label.  Let’s see. 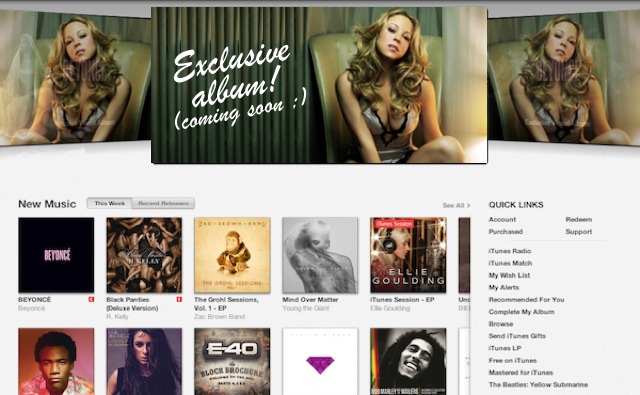 Last month, we reported that iTunes was preparing a massive, ‘Beyoncé-esque’ promotion for a major mainstream artist.  That artist now looks to be Mariah Carey, who seems to be flirting with a very similar release strategy for her upcoming release.

This time, Billboard is catching wind of the details, and pointing to a ‘Beyonce-style album drop’ that will focus heavily on direct fan relationships, and of course, iTunes.  It also seems highly likely to exclude Spotify, now considered a low-rent distraction for superstar artists. “Though Carey doesn’t mention other artists in describing her strategy, it’s clear she’s taking a page out of the “Beyoncé” playbook,” Billboard reporter Andrew Hamp affirms, while also pointing to a restricted number of sales outlets.