Why Major Labels Are the Best Thing That Happened to Artists…

In this article entertainment attorney Steve Gordon, author of the Future of the Music Business, explains why the decline of the major labels is a bad thing for artists. 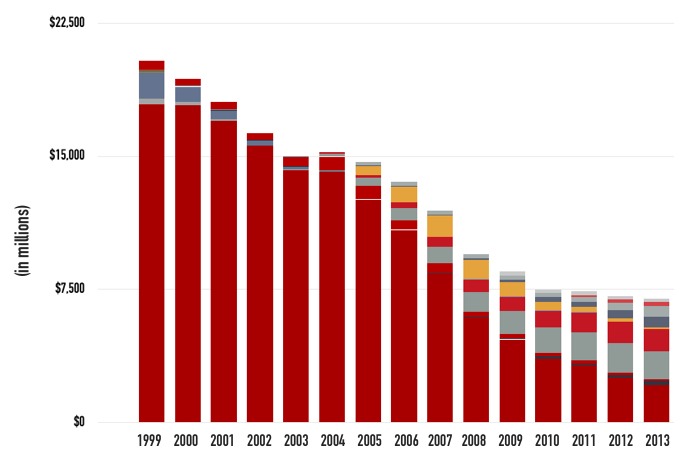 The above graph shows that accounting for inflation, income from recorded music has declined approximately 65% from its high point in 1999.  Since the major labels (Sony, Warner and Universal and their wholly owned affiliates such as Atlantic, Capitol, Def Jam, Interscope, Motown, Epic and Columbia) distribute 85% of recorded music, they’ve been hit the hardest.

But so have the major indies such as Beggars Group, Mute, SubPop and Domino.  As a result they have less money to sign and support new artists.

II. Why This is Bad for Artists

Nobody ever accused the majors of being saints. In fact, they used to, and continue to do a number of really shitty things.  For example;

– strip the artists of their copyright interest in their recordings under “work for hire” clauses;

– reduce the artist’s royalty with inflated or totally unjustifiable deductions such as an inflated 25% packaging deduction, and a 10% “net sales” deduction based on no expense at all;

– they reduce the artist’s mechanical royalty for songs they write by 25% (the infamous “controlled composition” clause);

– they pay the artist a royalty equal to the royalty for normal retail sales (generally around 15%) for paid downloads, even though the labels do not sell any records to iTunes or other download stores, but rather authorize, that is, provide a license to such stores to sell downloads, and artists have traditionally received 50% of income from licensing income; and

– most artists signed to majors (and many indies) are receiving absolutely nothing from advances payable to the labels from Spotify and other interactive streaming services.

Yet for all these sins and others, the declining fortunes of the majors and leading indies is a bad thing for artists.  That’s because the labels help artists, but not as many as before, by doing all these things:

– they get them on commercial radio, which is still a key to mainstream success;

– pay for tour support and arrange for them to play as opening acts for already established artists and stars;

– book them on popular TV shows; and most crucially

– pay advances so an artist can quit their day gig and focus full time on music.

An Ad Age article published today, in which I am quoted, drives my point home.  The article is “Capitol Music Unit Holds First New York Upfront” and describes how Capitol Records organized an event at Manhattan’s City Winery to introduce three of their new artists, and got brands such as HBO and advertisers such as Ogilvy and Mather to attend.

This is the kind of priceless marketing that most unsigned artists can’t do on their own, and usually can’t get anyone else to do for them — unless they have the financial means to pay for it.

In this case, Capitol paid the bill.  Yes, the label may deduct a portion of that bill from future income, but at least the event provided three new artists with a real opportunity for financial success.

Sadly, although the Internet allows unsigned artists to potentially reach a worldwide audience via aggregators who can get their records on digital music services, none of these players offer any of the benefits above.  Not the aggregators – such as TuneCore and CD Baby, both of which actually takes money out of the artists’ pockets; not the digital services such as iTunes and Spotify, which will usually do nothing to promote an unsigned artist; and not social networks like Facebook, which like the aggregators will take money from an artist in exchange for “boosting” their songs.

So maybe the bad old record companies were not that bad after all.  Or maybe the new “opportunities” that the Internet provides are much worse for artists than the labels ever were.

Think of this, the great executives of the glory days of major labels, and the artists they were most closely associated with:

• Berry Gordy of Motown and later Universal: The Jacksons, Stevie Wonder, Marvin Gaye, the Temptations, The Supremes and James Brown;

What name would you associate with TuneCore or Facebook?