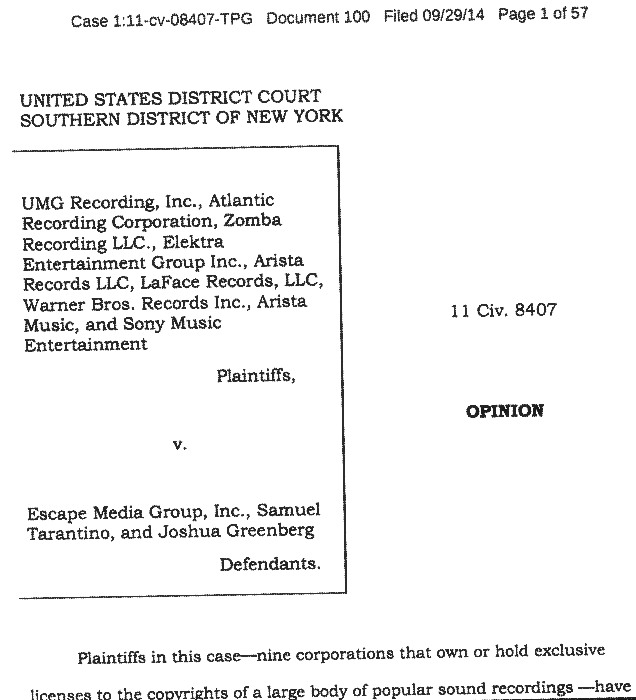 If you’re a Grooveshark user, you should probably start backing up your collection.

In a decision released Monday, the United States District Court in Manhattan has found Grooveshark guilty of massive copyright infringement.  The decision was based on a preponderance of internal emails, statements from former top executives, and direct evidence from internal logs.

The company was also willfully deleting files and source code, according to the evidence.

Specifically, CEO Samuel Tarantino and co-founder and CTO Josh Greenberg will face the heaviest charges.  The others were just scared rats: earlier, a number of top Grooveshark executives were removed from the defendant list in a settlement agreement.  That agreement now appears part of a clever exchange for cooperation.

Oh and did they talk…

Major label plaintiffs and other music companies, led by Universal Music Group, pushed for a summary judgment last week.  That judgment has now mostly been granted, which basically means Grooveshark has just lost in a very serious way and will probably go away soon.

Piles of evidence strongly suggested that Grooveshark not only knew about infringing content on its site, but willfully uploaded infringing content onto its servers.  They also ordered employees to do the same or face penalties.  That was the assertion of a lengthy, anonymous email that appeared on Digital Music News in late 2011, which itself led to a lengthy, three-year legal battle between Grooveshark and DMN over the identity of the poster.

Grooveshark lost that battle and never got to touch DMN’s servers.  But Grooveshark lead attorney John Rosenberg of Rosenberg & Giger asserted that the statements contained in the comment were false and could not have been made by a Grooveshark employee.

‘Escape directed its employees to obtain and make available the content necessary to launch Grooveshark.’

Now, the evidence suggests that the information in that comment wasn’t far off.  “[Former Grooveshark executives] made it very clear that all employees were expected to upload as much music as possible into the Grooveshark system, including the most popular and current songs,” the decision stated.

The decision contained damning emails and testimony, including this instructive mailed by Tarantino to all employees in 2007:

“Please share as much music as possible from outside the office, and leave your computers on whenever you can. This initial content is what will help to get our network started—it’s very important that we all help out! If you have available hard drive space on your computer, I strongly encourage you to fill it with any music you can find. Download as many MP3’s as possible, and add them to the folders you’re sharing on Grooveshark. Some of us are setting up special “seed points” to house tens or even hundreds of thousands of files, but we can’t do this alone…

There is no reason why ANYONE in the company should not be able to  do this.  And I expect everyone to have this done by Monday.  IF I DON’T HAVE AN EMAIL FROM YOU IN MY INBOX BY MONDAY, YOU’RE ON MY OFFICIAL SHIT LIST.”

Grooveshark’s user logs also showed massive amounts of illegal uploading, or ‘seeding’, by Grooveshark employees.  That was substantiated by both the logs and experts at Audible Magic.  Even more damning, large portions of the database and associated records were deleted.  That is considered a giant red flag in these types of cases.

“Escape’s deletion of the uploading records of Greenberg and other users was intentional.  It was performed after Escape had received specific notice to preserve these records,” the court concluded.

All of which is ironic given that Grooveshark demanded that Digital Music News preserve massive portions of data.  That is, even while they were deleting their own.  Perhaps more seriously, the evidence introduces the question of exactly what Grooveshark attorneys at Rosenberg & Giger and McPherson Rane knew when they were telling judges in California that the information contained in Digital Music News’ comment section was false.

Grooveshark attorney John Rosenberg has just spoken with Reuters and the New York Times. He noted that Grooveshark (and parent company Escape Media Group) may appeal the decision.  Let’s see.

The full decision is here.