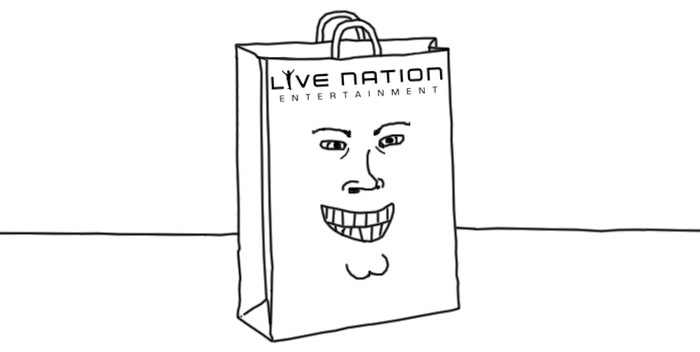 Noisey editor Dan Ozzi absolutely hates everything that Live Nation stands for.  Which is unfortunate because Noisey is owned by Vice Media, which just signed a major corporate deal with Live Nation.

Here’s an excerpt of Ozzi’s opinion of the company that he is now partnered with:

If you know anything about Live Nation, it’s not news to you that they are a gigantic, dickbag corporation intent on monopolizing live music.

Many small venue owners and local promoters have accused them of deliberately trying to undersell them and drive them out of business, much like Amazon takes a financial hit on book sales just to eliminate competitors.

Here’s an idea of how bad Live Nation’s stranglehold is: Back in 2010, they attempted to merge with fellow live music giant dickbag Ticketmaster and wouldn’t you know it, the United States Justice Department said that was a-ok because ha ha our system works so well. But in the middle of this unholy union, the Computer & Communications Industry Association (which includes companies like Google and Microsoft) tried to stop the merger, citing that it would not “protect competition in the primary and secondary markets for live event ticketing.”  That’s bad.

When companies that produce the computers used in every office in America and a search engine used by 9 trillion users every single day (source: Google.com) say that your company is an out-of-control money-grubbing scumbag, that’s bad news.

But Live Nation taking over the live concert circuit is nothing new.  This list on Billboard is just a reminder that while we’re constantly bombarded with stories about how badly the music industry is hurting, clearly Live Nation is doing just fine.  Of course they are, they own most of it.

Here’s the thing though: You can only blame Live Nation for so long.  Their stranglehold on live music is only going to continue to grow unless we all make a conscientious decision to avoid them.

Homogenized commercialization and monopolies are all well and good for our nation’s food franchises and pharmaceutical companies, but shouldn’t live music belong to the people?

That was both rhetorical and overly call to armsy.  The answer is yes.  Yes it should.  So do your part.  If you are in a band, book your tours at independently operated venues.  Tell your booking agent you don’t want to give Live Nation business.  Book shows in basements and libraries and in the back of bowling alleys if you can.  And if you’re just a regular ol’ concert-goer, don’t buy Live Nation/Ticketmaster’s fee-heavy tickets and make an effort to avoid their locations whenever possible.  They list them right here on their website.

Image by Rob DiCaterino, adapted via Creative Commons Attribution 2.0 Generic.  Written while listening to Jay-Z and araabMUZIK on Beats.