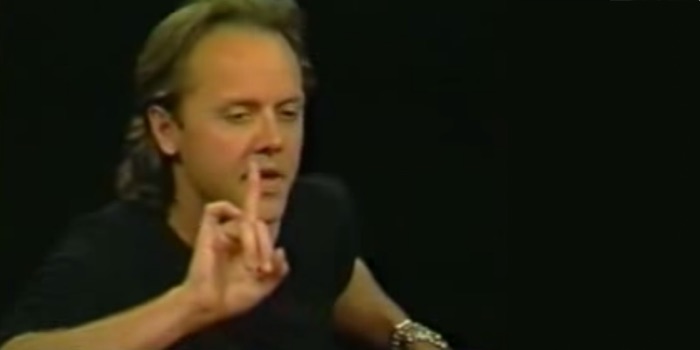 From an interview with Lars Ulrich on Charlie Rose in 2000, shortly after Metallica initiated legal action against Napster.

Charlie Rose: What is it about this, strip it away for us.  Why is [Napster] such a bad thing, that you want to stop it?

Lars Ulrich: In essence, it’s about control, it’s really about controlling what you own.  We clearly own our own songs, we own the master recordings to those, and we want to be the ones that control the use of those on the internet, that’s it in the essence.  So we are going after Napster legally, in a legal form, but at the same time what’s becoming increasingly important to us is to try to get this out into the public forum, to try and make people understand what’s at stake here, and what the ramifications are if this is not something that is dealt with and guided with some sort of parameters that makes the artists, the service providers, and the fans out there happy.

Ulrich: What’s at stake is really the control of it.

Rose: An artist’s right to own and control his own art.

Ulrich: — control, yes, that’s what at stake for us, right now.  At the same time, this is something that changes every 15 minutes with the advent of another technological wonder, so you can only sort of trail where technology is going.   But right now what’s at stake is controlling [music], and trying to set some parameters for the future.

Rose: And people will say just this point, you talk about there always being a new technological development.  People will say that you’re trying to stop technology, and you can’t do that.

Lars Ulrich: No you cannot, and we’re aware of that.  So what we’re trying to do is be the first artist to basically set our foot down and say, ‘Wait a minute, time-out for one second. Let’s just sit down, and deal with this,’ and try to get both a public debate going on how to control this for the future.

And, also on the legal form go after Napster and show to the other upstart companies out there that provide similar services that if you’re going to do this, you’ll have people like Metallica with very deep pockets who are very tenacious and emotionally involved in this on your back all the time, and if that’s something you want to pursue basically.

Rose: You think this is the first step on a slippery slope —

Rose: — that will lead to the artist losing all control.

Ulrich: And not just musicians, all artists that create anything from scratch, absolutely.

…and later, addressing points by Chuck D, also being interviewed by Rose…

Ulrich (to Chuck D): Most of what you’re saying deals with the record companies being these money-hungry, greedy blah, blah, blah.  Remember one thing: I can guarantee you, there is nobody at Napster that is doing this as a charitable event for all of mankind.

Ulrich: There are investors behind Napster, and there are people counting the days until Napster has an IPO offering and everyone makes millions of dollars in return for their work.

Chuck D: But there’s always been the shadow of technology lurking over entertainment anyway.  And it’s definitely  been two different worlds.

Ulrich: But there are millions of dollars involved in [technology] just as there’s millions of dollars involved in the evils of the music business as you’re saying.  And if the record company bosses don’t take the money then the internet people are going to take the money, somebody is going to profit off of this.  And if it’s not the artist, then you’re profiting illegally.

It’s bulletproof, I mean who can argue with that?  I just think it’s ignorant to say that just because you take it away from the record business, and the record companies, and you hand it to these other people that are going to make it available in another way, that there’s not going to be the same profiteering from it.  That is ignorant.

Lars: — but I’m not crying about the music business making money off me, because they invested in me.  Fred Durst sits there and says ‘I believe in Napster and want to go against the recording companies,’ well who paid for your ‘Nookie’ video?  Who paid the $600,000 so you could have your video played on MTV that made you sell 8 million [album] copies?

You didn’t pay for that yourself.