The Next Time an Airline Makes You Check Your Guitar, Show Them THIS 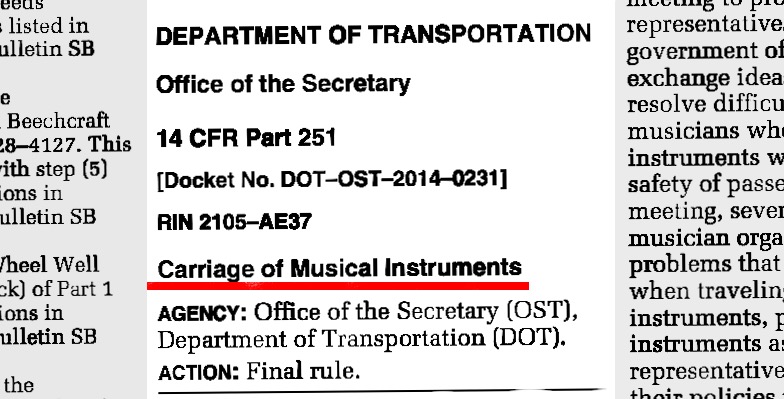 This won’t be a ‘recommendation’ or ‘guideline’ for a guitar carry on much longer.  Effective March 6th, 2015, it’s the law.

As of Monday, January 5th, the US Department of Transportation has issued its Final Rule of Law regarding on-board luggage.  It dictates that all US-based carriers must allow musicians to carry a guitar, violin, or other similarly-sized instrument if room exists.  It allows guitar carry ons in many cases, and clarified rules for airline agents.

Each covered carrier shall permit a passenger to carry a violin, guitar, or other small musical instrument in the aircraft cabin.  This is without charging the passenger a fee in addition to any standard fee that carrier may require for comparable carry-on baggage, if:

(a) The instrument can be stowed safely in a suitable baggage compartment in the aircraft cabin or under a passenger seat, in accordance with the requirements for carriage of carry-on baggage or cargo established by the FAA; and

(b) There is space for such stowage at the time the passenger boards the aircraft.

Turns out its harder to have a guitar carry on that we thought.  And this all started with a bunch of pissed-off musicians, like Deer Tick.  In fact, their nightmarish experience with luggage provoked a major reaction in Congress.  Amazing what one crushed guitar can inspire at the highest levels of government.

There’s also this music video inspired by United Airlines, which will forever remain in infamy.  In it, the airline insists that a guitar could not be carried on board, then goes about destroying it.  It’s all great fun (unless you can related).

Also Read:  Why Buying Spotify Streams Is for Losers — And Earning Real Followers Is for Winners

Here’s the complete, updated body of law relating to guitar carry on guidelines.  Musicians should feel free to present this to any uncooperative airline agent.