Bjork: “You’re Not Imagining Things. It’s Tough for Women in the Industry” 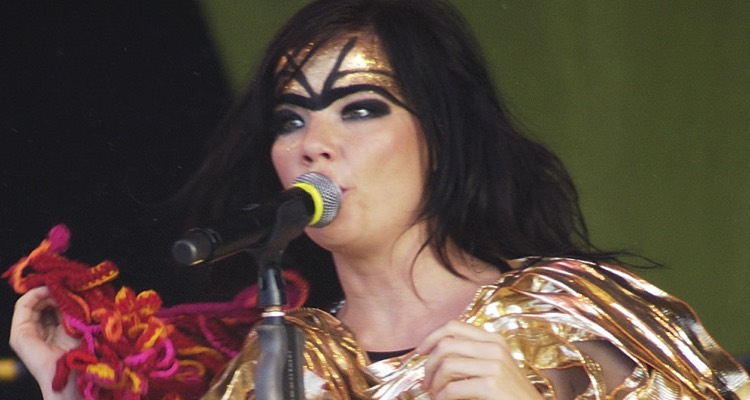 “I want to support young girls who are in their 20s now and tell them: You’re not just imagining things. It’s tough. Everything that a guy says once, you have to say five times.” Bjork.

I’ve spoken to a number of women that have used their platform to advocate for other females in music.  They’ve spoken quite eloquently on these issues. Whenever I explicitly cover sexism, (usually in electronic music) commenters crawl out of the woodwork, explaining that sexism isn’t actually an issue.

Therefore, I keep writing about it.

Enter Björk, who’s just released her new album Vulnicura. The following is a quote from a recent Pitchfork interview…

Pitchfork: When it was originally misreported that Vulnicura was produced by Arca, instead of co-produced by you and Arca, it reminded me of the Joni Mitchell quote from the height of her fame about how whichever man was in the room with her got credit for her genius.

Bjork: Yeah, I didn’t want to talk about that kind of thing for 10 years, but then I thought, “You’re a coward if you don’t stand up. Not for you, but for women. Say something.”

So around 2006, I put something on my website where I cleared something up, because it’d been online so many times that it was becoming a fact.  It wasn’t just one journalist getting it wrong, everybody was getting it wrong. I’ve done music for, what, 30 years? I’ve been in the studio since I was 11; Alejandro had never done an album when I worked with him.  He wanted to put something on his own Twitter, just to say it’s co-produced.  I said, “No, we’re never going to win this battle. Let’s just leave it.”  But he insisted.  I’ve sometimes thought about releasing a map of all my albums and just making it clear who did what.  But it always comes across as so defensive that, like, it’s pathetic.  I could obviously talk about this for a long time.

“A lot of the time, [Kanye] wasn’t even there.  Yet no one would question his authorship for a second.”

Pitchfork: The world has a difficult time with the female auteur.

Bjork: I have nothing against Kanye West.  Help me with this—I’m not dissing him—this is about how people talk about him.  With the last album he did, he got all the best beatmakers on the planet at the time to make beats for him.  A lot of the time, he wasn’t even there.  Yet no one would question his authorship for a second.

If whatever I’m saying to you now helps women, I’m up for saying it.  For example, I did 80% of the beats on Vespertine and it took me three years to work on that album, because it was all microbeats — it was like doing a huge embroidery piece.  Matmos came in the last two weeks and added percussion on top of the songs, but they didn’t do any of the main parts, and they are credited everywhere as having done the whole album.

[Matmos’] Drew [Daniel] is a close friend of mine, and in every single interview he did, he corrected it.  And they don’t even listen to him.  It really is strange.

Pitchfork: How does it make you feel when this happens now?

B: I have to say—I got a feeling I am going to win in the long run, but I want to be part of the zeitgeist, too.  I want to support young girls who are in their 20s now and tell them: You’re not just imagining things. It’s tough. Everything that a guy says once, you have to say five times.  Girls now are also faced with different problems.  I’ve been guilty of one thing: After being the only girl in bands for 10 years, I learned—the hard way—that if I was going to get my ideas through, I was going to have to pretend that they—men—had the ideas.

I became really good at this and I don’t even notice it myself.  I don’t really have an ego.  I’m not that bothered.  I just want the whole thing to be good.  And I’m not saying one bad thing about the guys who were with me in the bands, because they’re all amazing and creative, and they’re doing incredible things now.  But I come from a generation where that was the only way to get things done.  So I have to play stupid and just do everything with five times the amount of energy, and then it will come through.

When people don’t credit me for the stuff I’ve done, it’s for several reasons. I’m going to get very methodical now! [laughs] One! I learned what a lot of women have to do is make the guys in the room think it was their idea, and then you back them up. Two! I spend 80% of the writing process of my albums on my own. I write the melodies. I’m by the computer. I edit a lot. That for me is very solitary. I don’t want to be photographed when I’m doing that. I don’t invite people around.

The 20% of the album process when I bring in the string orchestras, the extras, that’s documented more. That’s the side people see. When I met M.I.A., she was moaning about this, and I told her, “Just photograph yourself in front of the mixing desk in the studio, and people will go, ‘Oh, OK! A woman with a tool, like a man with a guitar.’” Not that I’ve done that much myself, but sometimes you’re better at giving people advice than doing it yourself. I remember seeing a photo of Missy Elliott at the mixing desk in the studio and being like, a-ha!

It’s a lot of what people see. During a show, because there are people onstage doing the other bits, I’m just a singer. For example, I asked Matmos to play all the beats for the Vespertine tour, so maybe that’s kind of understandable that people think they made them. So maybe it’s not all sexist evil. [laughs] But it’s an ongoing battle.

I hope it doesn’t come across as too defensive, but it is the truth. I definitely can feel the third or fourth feminist wave in the air, so maybe this is a good time to open that Pandora’s box a little bit and air it out.”