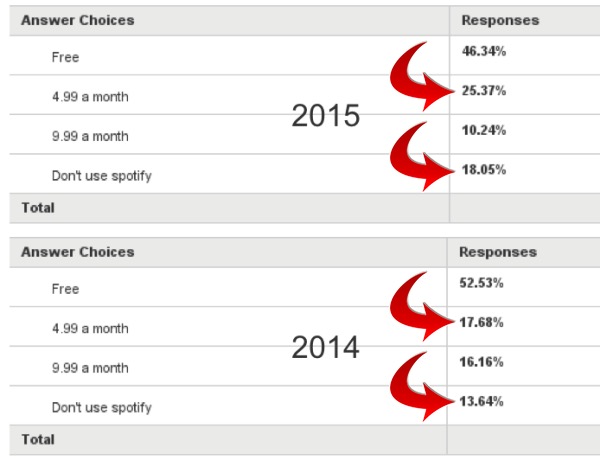 Spotify is already peaking amongst college students, according to survey data now emerging.  The survey, conducted at the University of Georgia and published by professor David Lowery, shows that students are rapidly abandoning full-priced, $9.99-a month Spotify accounts.

They may also be leaving the service entirely.  “Revenue from paid subscriptions for the service appears to have already peaked for this important group,” Lowery noted.

At the very least, the data shows a downward trend in price.  Just last year, Spotify introduced a special, $4.99-per-month student rate, a move designed to court the cash-strapped demographic.  But instead of drawing fresh faces, the move appears to be causing a migration from higher-priced, $9.99 accounts, while the overall number of subscribers declines. “This [decline] appears to be the result of students switching from the $9.99 service to the $4.99 service,” Lowery continued.

“Or put another way Spotify is cannibalizing it’s own paying subscribers resulting in lower revenues even as it loses overall popularity with these students.”

Roughly 200 students participated in the study.