Billy Corgan: Artists Are Constantly Being Told They Have No Value… 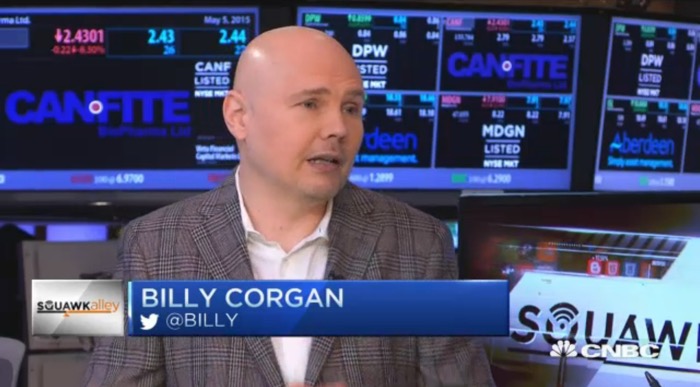 Corgan: The music industry is mostly run by feckless idiots, who do not subscribe to the normal tenets of capitalism. Which when they do, the business tends to work out well, stars rise to the top, everybody benefits.  But it’s still a parochial business that’s run by fiefdoms, way behind the times technologically.  Other companies, the tech world is just blowing music out of the water in particular.

And music artists need to figure out their true value in a free market society, which they’ve been slow to do because you have that old model of telling artists that they’re not worth anything, that they’re disposable.

Similar to what you’ve seen in the sports leagues, you’re gonna see that evolution now happen finally in the music business.

CNBC Host: So Billy what do you think of Tidal, because it seems to me like this is Jay-Z’s attempt to swing the pendulum, to get the artist some more power.  That’s the way he’s talked about it, to slice the pie differently, and to get higher quality music out there, because it seems to me we’re in an era where it’s easier than ever to get low-quality bad music, and somebody’s got to push things the other way.   Or do you agree with his approach here, what should we do?

Corgan: The problem is, is that, although I celebrate the idea of him creating his own model, it leaves a lot of people out.  And so at some point, you have to have winners and losers because that’s the way it works.  So to try to sell it as an overt, altruistic thing is disingenuous because it’s not.  He’s taking his slice of the pie, which he has every right to do, he’s a powerful man and he works with powerful people.

But by the way I’m a powerful artist and I don’t remember getting a phone call from him, but I get phone calls from other people and I have to make similar decisions from the other end.  But to sell it as altruistic, I don’t buy it.

CNBC: But as we see more competition, more people like Jay -Z trying to get into the game.  How much more fragmented can this market be, as everyone fights over licenses, exclusivity —

Corgan: Wild West, Wild West, you’re going to a complete disintegration of the business model, and the reforming.

The problem is artists, because they’re generally sort of manipulated, it’s just an old business model of the music business, you’re told constantly ‘you have no value, you have no value,’ they’re slow on the uptake on how much value they actually have in this marketplace.

Because when it comes to athletes and rock stars, or music stars, those are two people that can sell a level of independence that works with marketers that nobody else can sell.  Hence, the quarterback for Green Bay, he does the ads —

Corgan: — that’s the world we’re entering into, but music’s been slow on that, because the old music business continues to try to control their little diminishing share on the market.

Corgan: I wouldn’t make it specific to Apple, because I just think it’s sort of like, music at one point had their whole world stitched up, they had their manufacturing, they had the distribution, they held the conversation.  Okay, if you really want to look back is when they ceded their power over to MTV.  When they let MTV build  a network on their juice for free, and then eventually kick music off the channel, and still call it MTV, right there that’s the tipping point.

And so tech is really just coming in at the wake of  what was the MTV version.

CNBC: So today is that YouTube, is that VEVO, who takes over that role?

Corgan: Hard to say, I know what you’re saying but it’s hard to say, because honestly I believe it’s Wild West now.

CNBC: So why would we get actors here at Post 9 saying ‘we’re in this golden of television and movies with distribution, and there are so many possibilities to open up’…

Why has that not worked for music, and is it possible to change the script somehow to get music back to value?   Do you have any insights into that, based on the other things you’ve got, you’re into wrestling, you’re into so many other forms of entertainment.

Corgan: Thank you for mentioning, I’m an executive with TNA Wrestling, God bless.  The problem is that there’s not enough money in music as a business model.  Where in television and vis-a-vis the advertisers and movies, there’s so much money that the controlling forces still circle around the stars in the right way, stars are taken care of better in those industries.

CNBC: Last question on touring, the narrative’s been written that all the money’s in touring, you gotta tour if you’re going to make any money at all —

CNBC: — you don’t buy that.  And you say that touring is frustrating because it’s all about the old stuff!

Who just made $3 billion for selling headphones?  The future for music artists is in brand identification.   Music will only be — excuse the French — the lubricant to make the bigger deal.

The bigger deal will be ‘I represent my company or I represent my brand’.  And once you saw that deal made, it’s over.  The old model of selling plastic is over.

At some point the music market is gonna have to come around and pay those artists what they’re worth, or they’re going to do what Jay-Z is trying to do, break off and make it his own deal.