Don Henley: ‘The Internet Is Slowly but Surely Killing the Idea of Copyright’ 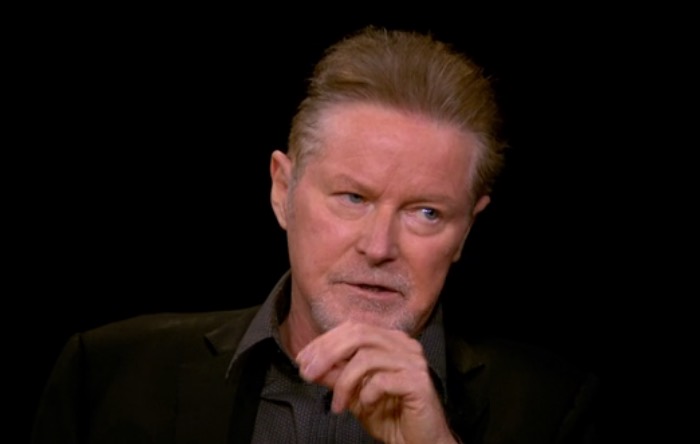 Charlie Rose: Most great artists, have at least told me, I’d say a majority have come to this table, many many great artists… they say it’s hard work.

Don Henley: Someone once said that writing is 10% inspiration and 90% perspiration, and I think it’s true.  To finish a great work, you might get a great epiphany or a great idea that comes to you in the middle of the night, and you start writing and you’ve only got this much [showing two fingers].

And after that, you sit down and you sweat it out.  And it is hard work.

That’s why I get so exercised about people stealing songs, because they have no idea what goes into those songs and the work that goes into them.  And that it’s a real job, it’s not a hobby, it’s a calling, and a lot of peo —

Henley: — a calling.  And there are a lot of people that don’t get to tour, the people in Nashville and Los Angeles who are just songwriters for a living, they don’t get to tour.  So they make their money solely from that song.  And now of course we have the interactive crowd, who think they can go in and take a song and change it up, it’s like going into a museum and painting a musta—

Henley: DJs, and the people who sample, and, mostly younger people who think they can take someone’s finished work, and actually tamper with it.  And they don’t understand copyright laws. It’s like walking into a museum and painting a mustache on somebody’s painting —

Rose: — that’s blasphemous to you.

“And that law, the Millennium Copyright Act, needs to be done away with, or re-written, because it’s allowing theft in the billions.”

Henley: It is. And it’s just not right. And we are — the internet is slowly but surely killing the idea of copyright. There was a law, bless his heart President Clinton signed it into law, it’s called the 1994 Millennium Copyright Act, and it has a loophole in it called the Safe Harbor clause, that is abused daily.  And that law, the Millennium Copyright Act needs to be done away with, or re-written, because it’s allowing theft in the billions. Again, we don’t get much response from government, because the big boys are there, with their lobbyists.

But songwriting is a difficult task, it is not easy to write a song. And you spend a lot of time and money recording a song properly, and performing it, and people need to have a little more respect for the job.