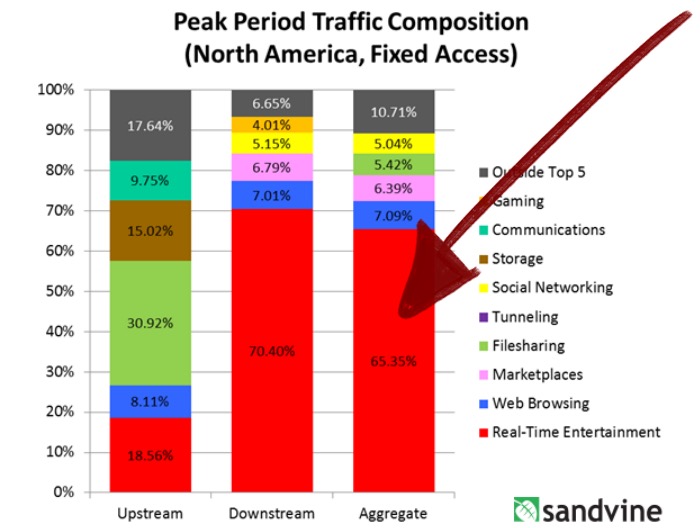 BitTorrent used to be the ultimate bandwidth hog.  These days, video and audio streaming apps are easily taking that crown.  According to details released this morning from Sandvine, streaming apps like Netflix, YouTube, Amazon Video, Spotify, Apple Music, SoundCloud, and Hulu now consume an impressive 70 percent of internet bandwidth in North America. That figure is likely to increase as users continue to migrate towards streaming-focused, subscription and ad-based media.

Netflix is grabbing an impressive piece of the pie with 37.1 percent of recorded bandwidth in North America.  Indeed, Netflix is kicking butt with a paid-only model, an approach shunned by the music industry’s top streamer, Spotify.  That raises some serious questions about Spotify’s ‘freemium’ approach, especially given similar piracy challenges in TV and film, and Netflix’s greater success in combating them.   “The leading service in 2015, Netflix, now has a greater share of traffic than all of streaming audio and video did five years ago,” Sandvine CEO Dave Caputo relayed.

Surprisingly, YouTube is a distant second with 17.9 percent of the pie, though its percentages on mobile are far stronger (along with Facebook-owned giants Instagram and Whatsapp).  That may be the more important battleground, though segmenting mobile from ‘fixed-line’ broadband connections could be an analytical mistake.


Overall, Amazon Video trails in third with 3.1 percent on fixed-line, with audio-focused streaming companies requiring far less data transfer.  Astoundingly, BitTorrent traffic only accounted for 5 percent of total bandwidth, down from 7 percent last year.  Back in 2008, that figure was 31 percent.