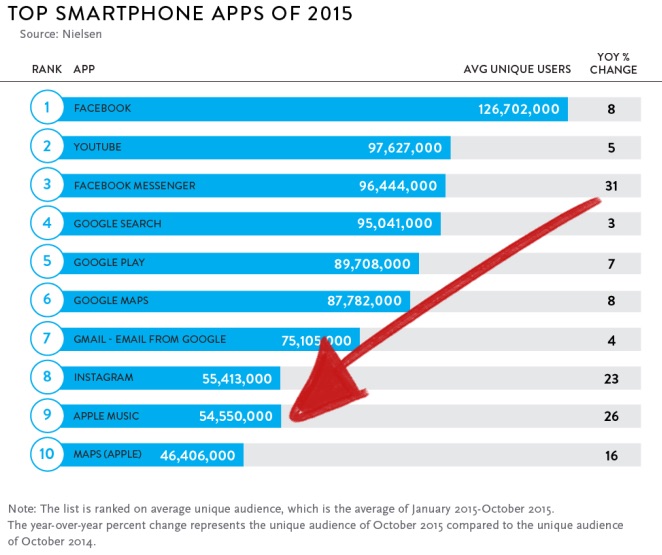 Apple Music is now the ninth largest smartphone app in America, according to a ranking just released by Nielsen.  That lags significantly behind YouTube and Google Play, but solidly beats Spotify, which didn’t even make the top 10.  According to the finding, Apple Music had an ‘average unique audience’ of 54.55 million after just four months on the market.

Given the tight timeframe, those users could easily be called ‘active,’ though a substantial percentage of iOS users auto-downloaded the app.  Indeed, some iPhone users may be unaware that they have Apple Music on their decks, much less be ‘actively’ using the service. 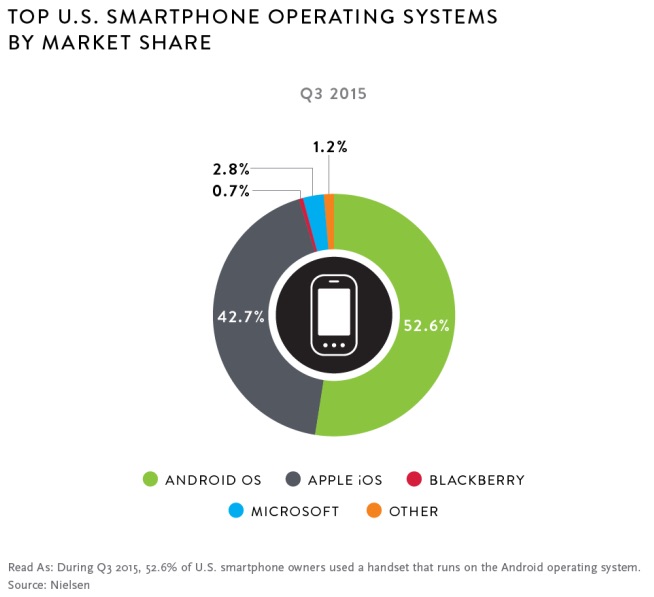 None of those considerations apply for Android users, who must intentionally download Apple Music to get started.  Importantly, this ranking would not include those users given Apple Music’s expansion onto Android in November.

Also missing from illustrious top-10 is Pandora, whose app-heavy platform boasts 80 million active listeners.  But Apple Music offers substantially similar functionality to Pandora, with a better interface and less obnoxious commercial breaks.  That, alongside the heavily-hyped Beats 1, could be slowing Pandora’s once meteoric listener growth.

The report solidly plants Apple in Spotify’s rearview mirror, and sets the stage for a serious horserace in 2016.  Most recently, Spotify announced a milestone of 20 million paying subscribers, with 75 million active users overall (55 million free users).  Overall, Spotify projects a userbase of 100 million by January, with more than 25 million paying.

Sounds big, but Apple could become bigger.  After just a few months on the market, Apple quickly crossed 6.5 million paying subscribers, with everyone paying at least $9.99 (or more).  Whisper numbers now suggest that Apple Music will have more than 8 million by year-end, and possibly, 10 million on the higher-end.