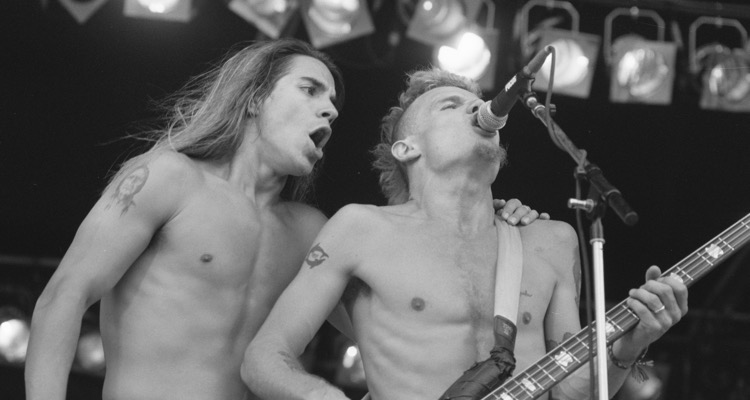 Anthony Kiedis and ‘Flea’ of the Red Hot Chili Peppers, 1989, one year before the accusation.

Just because someone accused the Red Hot Chili Peppers of sexual harassment, doesn’t mean they did it.

The Red Hot Chili Peppers are older guys now, but their early legacy dripped with overt, high-intensity sexuality and ribald humor.  Early fans will remember near-naked performances (with socks on their dicks), sexually explicit songs, plenty of outlandish humor, and Anthony Kiedis’ oozing sexual energy.  It wasn’t just part of the act, sex was a big part of the high-energy appeal that drove the Red Hot Chili Peppers’ songwriting, performances, and overall musical energy.

Now, the question is whether the Chili Peppers were going way overboard, and using their considerable fame and influence to make other people do things they didn’t want to do.

Last week, Julie Farman, a staffer at Epic Records (Sony Music Entertainment) in the early 1990s, wrote a detailed blog alleging sexual harassment from two RHCP members (possibly involving Kiedis, but who knows).  “Twenty-five years ago, when I worked at Epic, I had a fucked up experience with the Chili Peppers,” Farman published in a now heavily read attack piece.  “The incident was about a 3 on the 1-10 scale of sexual harassment in the music business of the ‘80s and ‘90s, and I never consciously thought it was that big a deal.”

So what happened? Farman, an associate director of media and artist relations, told it like this:

At first I refused to even go to a meeting with the band. The A&R guy was a friend, though, and after an hour of talking about it, I reluctantly agreed to attend. At the meeting, I did a credible impression of a person who didn’t think the Chili Peppers were assholes or that their music was completely fucking horrible; I talked enthusiastically about strategy, artist development and press campaigns, and I presented ideas on further establishing their image. None of them involved wearing socks on their dicks.

Afterwards, I took two of the Chili Peppers to the storage room where we kept the box sets and CDs.  As we looked in the cabinet, they pressed up against me and told me about all of the ways we could make a super sexy sandwich.

At first I thought they were joking. When I realized they weren’t, I ran from the storage room to my office, where I closed my door, sat down at my desk, and cried. I was humiliated and weirdly ashamed, and embarrassed that I was humiliated and weirdly ashamed. There was far worse going on in the music industry at the time, and I thought I was a badass. Being a victim didn’t fit my self-perception.

Afterwards, Farman recounted a half-baked apology from the Chili Peppers’ manager at the time.  That was basically the end of the incident (until now).

The only problem with all of this is that it’s difficult to know what really happened in that room, if anything.  It could be slightly exaggerated, totally fabricated, or entirely accurate, but regardless of which it is, these accusations have serious ramifications for the Red Hot Chili Peppers twenty-five years later.  Because even if these accusations are completely false, this is a band that may now suffer serious damages ahead, including canceled gigs, lost collaboration opportunities, lost interviews, and general character assassination.

In fact, it’s unclear if Flea would have been invited to play the ‘Star Spangled Banner’ to commemorate Kobe Bryant’s last game at the Staples Center if this blog was written two weeks earlier.  Maybe the NFL would have passed on having them play the Super Bowl if this surfaced a few years ago.

In the essay, Farman spoke about past charges of public indecency and sexual battery lodged against Kiedis, Flea, and drummer Chad Smith, most of which appear to stem from an outrageous performance that went a little too far.   These were qualified as misdemeanors, but dragging those charges into the essay effectively paints this group as a group of dangerous sexual predators, despite a lack of serious criminal incidents.

For all we know, Farman was rejected by a member of the group, and felt rebuffed.  Maybe she’s a mentally unstable person, off her meds but armed with a wifi connection. Maybe she’s a great, trustworthy person.  The point is, we don’t know who this person is, and we can’t verify this information (at least from the way it appears currently).  Unfortunately, in the modern-day world of total information dissemination, that doesn’t matter as much anymore.

The damage is already done; these guys might as well be guilty.

The point of all of this is not to diminish the seriousness of sexual harassment, which is suffered daily in workplace situations and makes it very hard for many women (and men for that matter) to function professionally and advance on their merits.  That’s a serious issue.  But piling on accusations against a group that may be completely innocent isn’t the right path, especially when it has the potential to assassinate this group’s character and seriously impact their future career arc.

If there’s real evidence, fine.  If a judge rules against them, we should accept that.  Otherwise, the Red Hot Chili Peppers are innocent.