Exclusive: This Is the Contract Songwriters Are Signing With Spotify 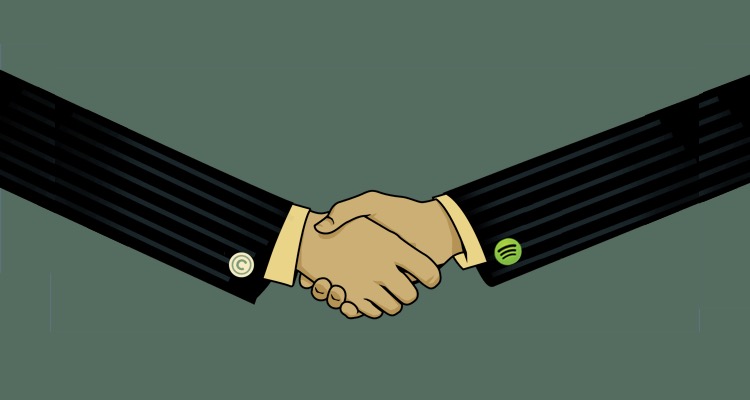 Early last month, Digital Music News broke the story of a broad-reaching agreement between Spotify and music publishers to resolve tens of millions in unpaid royalties.  That agreement, forged by major publishing organization NMPA, would involve a one-time, $5 million penalty payment by Spotify as well as the construction of an interface to properly match payments back to songwriters and publishers.

Now, all of those details have been confirmed and codified into a blank contract between Spotify and individual publishers and songwriters.  That includes the $5 million fee, as well as details related to Spotify’s matching database and efforts to issue payments on unpaid, accumulated mechanical licenses.  “NMPA has been engaged in negotiations over the failure by several digital music services to license and pay songwriters and music publishers appropriately,” Israelite confirmed to DMN last month.   “I am hopeful that we can reach a just settlement that provides a framework for moving forward as business partners – as it should be.”

That agreement is now locked-and-loaded, with publishers offered a number of ways to move forward.  In an undated letter sent to member publishers and songwriters and shared with Digital Music News, the NMPA outlined the details of the ‘Spotify Pending and Unmatched Usage Agreement,’ including the $5 million, one-time fee.  “I am not excusing the decision by any interactive streaming company not to obtain the proper licenses prior to using your songs,” Israelite informed NMPA members.  “I also will not criticize copyright owners who choose to protect their property rights in any manner they see fit — they are THEIR property rights.  However I believe this settlement (and more to come) strike the proper balance.”

“First, Spotify will pay $5,000,000 on top of all of the royalties owed as a bonus pool for participating publishers.”

The agreement also gives publishers and songwriters the ability to view all of their songs, and correct any data issues to unleash payments (past and future).  But the last part will be the most controversial: the letter indicates that after a set period of time, all unclaimed royalties will be divided amongst NMPA participating publishers and songwriters, even if the royalties don’t belong to them.

That is viewed as a direct stab against a pair of class action lawsuits being lodged against Spotify, including one initiated by longtime artist activist David Lowery (Lowery vs. Spotify USA).  That case remains ongoing, though the following contract could go a long way towards deflating the case.