Why Rolling Stone Magazine Needs to be Shut Down 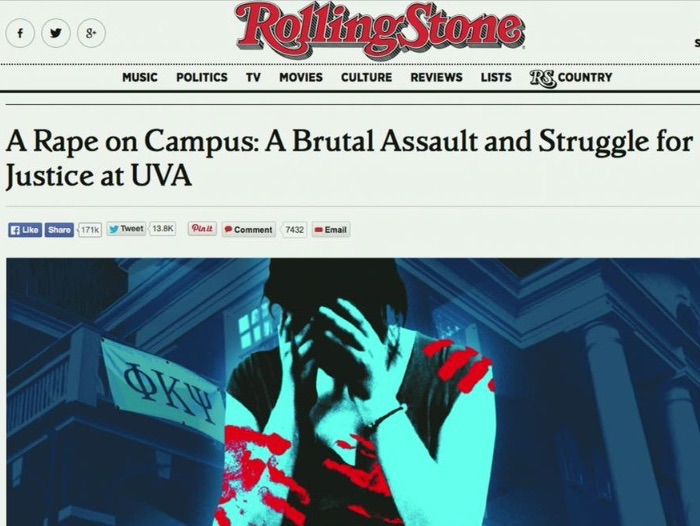 Rolling Stone ruined a bunch of lives, and now, they’re getting away with it.

On November 19th, 2014, Rolling Stone magazine penned a gripping account of a University of Virginia student who was brutally gang-raped at a fraternity party.  The horrific events featured predatory frat guys, a drunken party, a shattered victim, and Rolling Stone screaming for justice not served.

Rolling Stone is known as an iconic music magazine, but smartly expanded beyond album reviews and artist interviews decades ago.  Some of those pieces were legendary and groundbreaking, and Rolling Stone established a reputation for hard-hitting, serious journalism.

At the time of the article, Rolling Stone carried a solid, respected reputation, not to mention some serious readership.  As such, the effects of the story were sharp and immediate.  Protests started, on campus and off, with intense pressure to bring the perpetrators — and the collegiate ‘rape culture’ that created it— to justice.  Members of the Phi Kappa Psi fraternity were threatened and vilified; the house became colloquially known as ‘the rape frat’ around campus.

The only problem with that story is that it was proven to be completely false, but not before ample amount of damage had been inflicted.  Strangely, the real victims were the ones that never committed the crime: the University of Virginia took a huge hit to its reputation, enrollment, and alumni relationships; fraternity members themselves were denigrated on campus and off.  Repairing that damage would prove difficult, especially with an enraged internet publishing names and demanding action.

And this wasn’t a case of accusations unproven, or conflicting accounts.  As the facts started piling up, it was clear that Rolling Stone and the author of the story, Sabrina Erdely, had written a complete work of fiction.  For starters, there wasn’t even a party the night of the alleged rape.  Even worse, the details were totally fabricated: a violent attack featured a shattered glass table, yet police couldn’t find any shards.  The gang-rape supposedly involved seven members of the Phi Kappa Psi fraternity, yet Charlottesville police found no evidence that anything remotely resembling that story had occurred.  “There is no substantive basis to support the account alleged in the Rolling Stone article,” Charlottesville Police stated in March of 2015.

Shockingly, it was totally made up.  Rolling Stone retracted the story, but defamation lawsuits started to emerge.  One of those came from three fraternity members whose names got dragged into the mud: George Elias IV, Stephen Hadford and Ross Fowler.  Rightfully, the members brought a suit, but unfortunately, Rolling Stone has now dodged a massive defamation bullet.  In a decision handed down this week, US District Judge P. Kevin Castel in Manhattan conceded that the story was completely fabricated, but denied damages because the three members weren’t specifically named in the account.

Additionally, Castel ruled that Rolling Stone didn’t state that Phi Kappa carried a ‘rape requirement’ for incoming members.  “Viewed in the overall context of the article, the quotes cannot reasonably be construed to state or imply that the fraternity enforced a rape requirement as part of an initiation ritual or a pre-condition for membership,” Castel opined.

That decision seems to overlook a major problem: the names of the three individuals didn’t have to be mentioned in the article.  They’re being published everywhere, including this very article.  The web just doesn’t discriminate, and it doesn’t forget, which means that these three guys — not to mention others implicated in the false account — will face serious reputation problems, potentially for the rest of their lives.  And it all started with Rolling Stone, whether or not they were naming names or not.

Part of the problem is that frat boy culture isn’t choir boy culture, and it jars against what society deems morally correct or ‘PC’.  That’s not to defend it: drunken, alpha-male ‘bro brah’ culture is getting a little dated, it’s laughably sexist and meat-headed at its core.  But that ‘bad behavior’ isn’t illegal, though participating in that culture will now haunt these individuals as they attempt to progress towards a career, family, and post-college life.

It’s another re-run of the Duke lacrosse case, one that featured a bunch of privileged white lacrosse players hiring an impoverished, black stripper in an exploitative manner.  Another juicy story with all the right characters!  The only problem is that there wasn’t a crime, yet individuals like Reade Seligmann and Collin Finnerty are undoubtedly still dealing with the negative repercussions a decade later.  And if you doubt that, just Google it.

This time, unfortunately, we have a legendary music magazine cropping a fresh batch of victims.  Someone in our own industry took the bait, and forever complicated dozens of lives.  Still want your daughter to attend UVa?  Sadly, the answer is that many parents are thinking about this twice, and rightfully, the University itself launched its own lawsuit.  Maybe Rolling Stone and the author of the story can dodge that bullet as well, not to mention the promised appeal from the fraternity.

Perhaps all the legal fees and threats of crippling judgments have offered substantial punishment to Rolling Stone, and there’s a ruined journalistic career for Sabrina Erdely.  And the legal threats and challenges are hardly over, but so far, I’m getting the sense that most people have forgotten about this one.  People still read Rolling Stone and regard it as an authority; in the avalanche of information online, a lot of people never even read the story (or were even aware of it).

Great news for Rolling Stone, not so great news for the people accused in the story, directly or indirectly.  Those effects will linger for decades.  Even worse, we’re now witnessing a publication that is not only damaging lives and reputations, it’s using its legal and financial resources to get away with it.

This isn’t the magazine you subscribed to as a kid; and it’s not what should represent music and its surrounding industry in the future.