How Popular Is Used Vinyl? One Research Company Decided to Find Out. 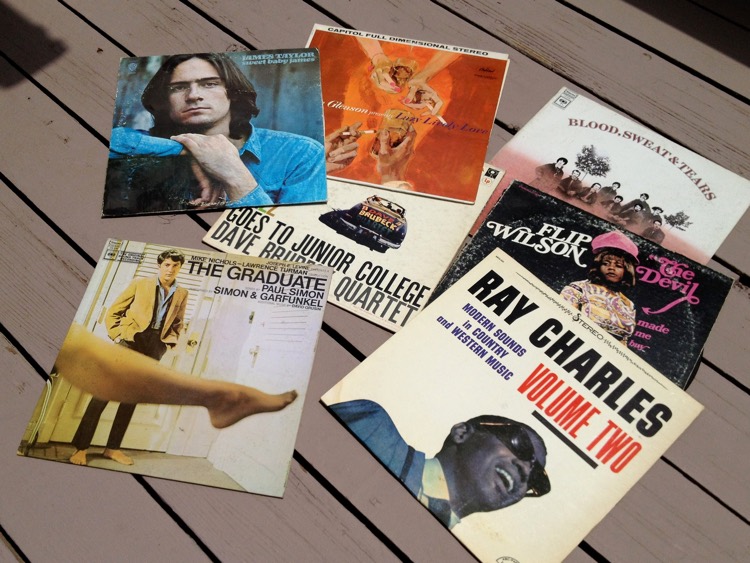 The vinyl resurgence might be a lot bigger than we originally thought.

Back in the early 2000s, the music industry had little idea that a vinyl resurgence was coming.  In the early 2010s, they were slow to understand the nuances between streaming, physical ownership, and retro demand that emerged.  And despite a near-decade of continued growth, surprising statistics about this newfound market are continuing to surface.  That includes new information on just how much used vinyl is being purchased, most of which isn’t being counted.

Slowly, a picture of what’s driving this vinyl resurgence is emerging, with lots of curious surprises.  The data doesn’t lie, and polls now show that a substantial number of vinyl buyers are in their 20s, while a massive percentage of younger buyers don’t even own turntables.

Even more surprising is the growing link between streaming music and vinyl purchases, one that includes free (or ad-supported) streaming on platforms like Spotify and YouTube.  The Jack Black, Hi Fidelity curator is now an obsolete snob, because every single song on the planet (basically) exists online, or, on your phone, and all of that is leading to greater purchases of LPs.

Now, research is uncovering lots of interesting details about used vs. new product.  According to data shared by research firm MusicWatch with Digital Music News this morning, a comfortable majority of vinyl sales are for used LPs, not newly-created product.  The existence of a massive used market has been recognized for some time, though research group MusicWatch actually went out and started polling consumers to figure out the breakdowns.  That research initiative not only revealed that most vinyl being bought is used, but that an interesting ‘dual market’ of buyers has emerged.

Just how much is used?

According to MusicWatch, roughly 62.5 percent of all vinyl purchases currently involved used product.  Most of this stuff was created in the 70s and 80s, though technically, ‘used’ simply refers to any product that isn’t being purchased for the first time. 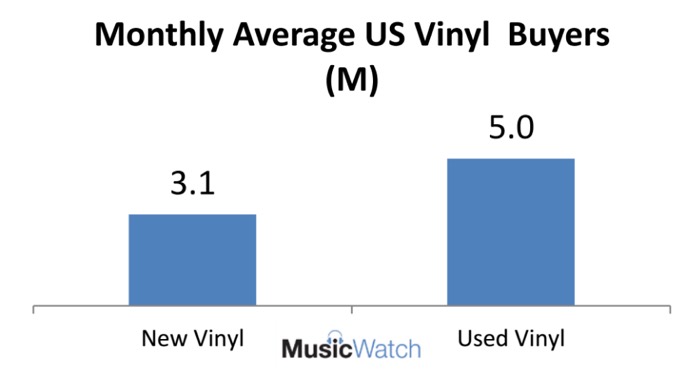 The above breakdown shows that not only is used vinyl being heavily purchased, but used heavily overshadows new when it comes to LP purchases.  “We currently project there are actually more customers for used vinyl than for new,” relayed MusicWatch’s Russ Crupnick.  Overall, MusicWatch polled 4,800 American consumers between January and April of this year, all of whom were over the age of 13.

Perhaps more revealing was the discovery of this ‘dual market,’ with buyers currently falling into new or used camps.  Some purchase both, but for the most part, buyers typically belong exclusively into one bucket or the other. 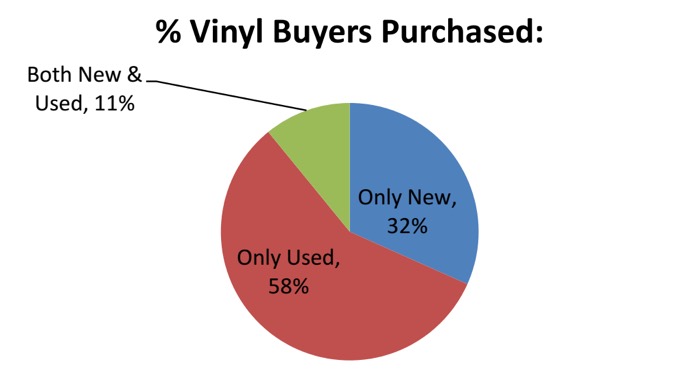 That’s actually encouraging for the music industry, according to Crupnick.   And the reason is that more used buyers will start to purchase newer product, while incoming buyers will continue to boost newer purchases.  “In any given month most vinyl buyers choose either new or used, but the more time goes by the more that will equalize, and certainly hardcore vinyl shoppers are more likely to buy both new and used in a given window of time.”

But what makes a person a ‘used guy’ vs. a ‘new guy’?  That’s a complicated question, though MusicWatch attempted to break down those patterns by factors like age and gender.  On the age front, it turns out that younger, 13-24 year-old buyers are leaning more heavily towards new product, with 35-44 year-olds also driving sales of new LPs.  On the flip side, older buyers (55+) seemed far more interested in used LPs, even though they theoretically have more money for newer product. 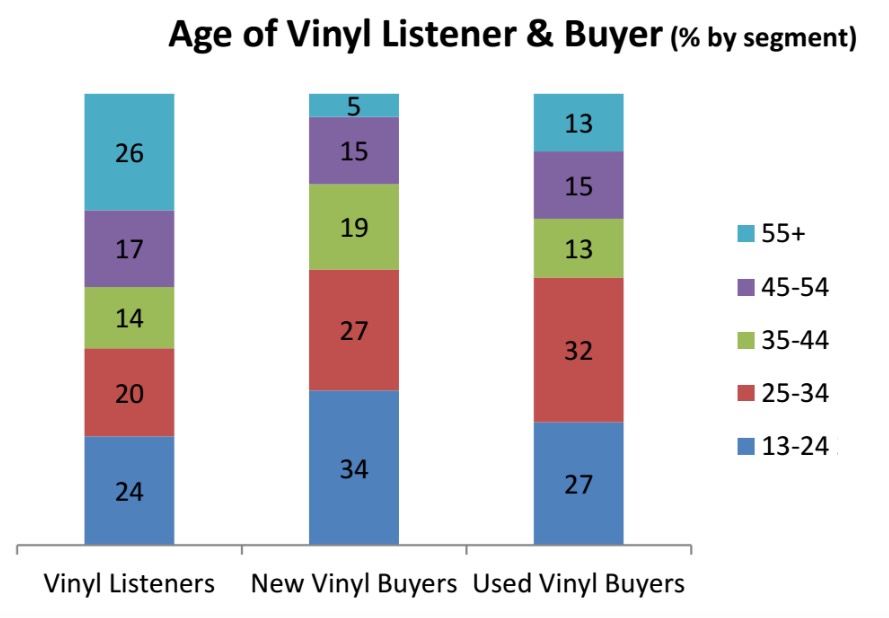 In the middle, the 25-34 year-old set showed a preference for used product.  “One-third of new vinyl buyers are aged 13-24, and by the way, 66 percent of new buyers are male,” Crupnick continued.  “The profile for used vinyl is similar, except that there are a few more in the 55 and over bucket. By contrast boomers really show their presence for listening to vinyl—the 55+ segment accounts for 26 percent of vinyl listeners.”

But make no mistake, Crupnick pointed to younger listeners as the biggest driver of this trend.  Part of that is driven by cool factor, raising questions of whether the vinyl revolution will remain long-term.  That said, vinyl itself could undergo a massive transformation in the coming years.  Earlier this year, Austrian firm Rebeat Digital patented plans for ‘HD Vinyl,’ the working name for higher-tech, higher-fidelity vinyl product that includes integrations with streaming and digital platforms.