If a Jury Sees This Video, Ed Sheeran Loses His Plagiarism Case 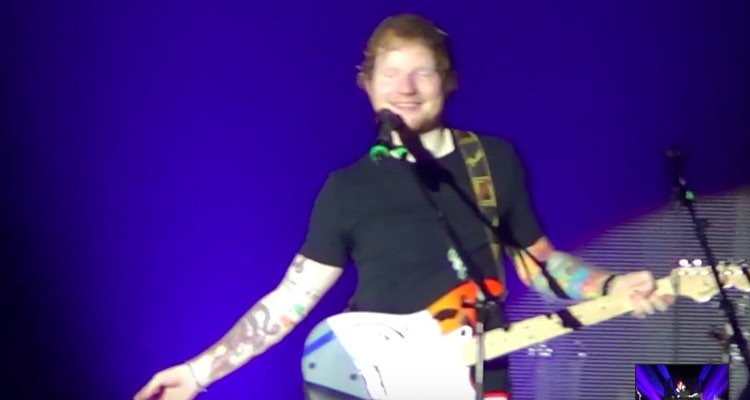 Fans record everything these days. That could be a huge problem for Ed Sheeran’s defense.

The question is whether this proves that Ed Sheeran actually plagiarized Marvin Gaye’s ‘Let’s Get It On,’ or whether the songs just bear some similarity.  But if a musically-uneducated, emotional jury is involved, this video will probably crush Ed Sheeran’s defense, and its presence could spark an early settlement by Sheeran’s attorneys.

The live performance, recorded at a Sheeran show in late 2014 in Zurich and subsequently uploaded onto YouTube, shows the singer easily transitioning ‘Thinking Out Loud’ into ‘Let’s Get It On’ — and possibly admitting a direct rip-off in the process.

Check it out.  The critical transition happens at 4:29, with the howls of the audience proving that this is an instantly-recognized classic.

Now, onto the next question: would this be admitted into evidence?  Seems perfectly relevant to the case, though expect Sheeran’s lawyers to fight its inclusion.  But that raises the next problem: all of that legal wrangling costs a ton of money, and the mere presence of this video could force Sheeran to settle with the heirs of Marvin Gaye co-writer Edward Benjamin Townshend, who helped create the soul classic.

Sadly, settlements are often entered purely to avoid the financial and time-consuming headaches of a trial, even if there’s little substance to the Gaye claim.  That is widely considered to be what drove Sam Smith to settle out of court with Tom Petty, who accused the singer of ripping of his track, ‘Won’t Back Down’ in the Smith hit, ‘Stay With Me’.  Smith, just 21 years old at the time of the suit, plausibly stated that he’d never heard of the Petty classic.

Back to the Sheeran dispute.  The heirs include members of the Townsend family, including Kathryn Townsend Griffin, Helen McDonald, and Cherrigale Townsend, a group that filed the action against Sheeran several days ago.  The actual document, filed in the United States District Court in the Southern District of New York, states:

“This is an action of copyright infringement…arising from the Defendants’ unauthorized reproduction, distribution and/or public performance of the Plaintiffs’ copyrighted musical composition “Let’s Get It On” (Let’s) using the hit song, “Thinking Out Loud” (“Thinking”), written by Amy Wadge and Ed Sheeran and subsequently recorded by Ed Sheeran.…”

More as we know more.