Lil Wayne: “There’s No Such Thing As Racism In America…” 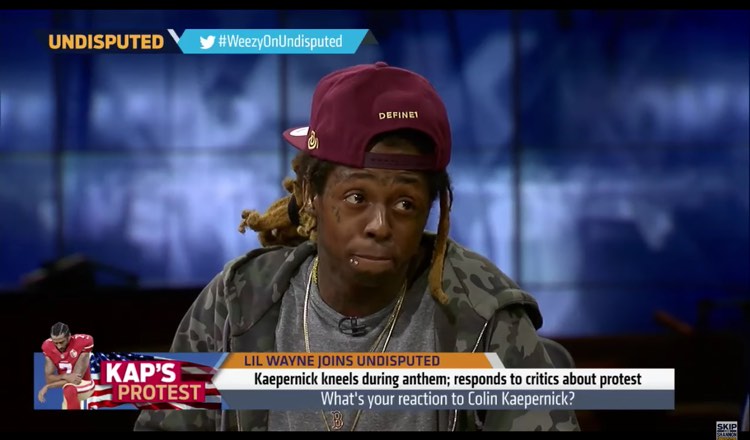 “Well, I don’t want to be bashed, cuz I don’t want to sound like I’m on the wrong — if there’s a side, but to me, I thought that was clearly a message that there’s no such thing as racism.”

Lil Wayne: Again, that’s right back to the man and his decisions, that’s all I can say.  I’m really not into it enough to even give an opinion.  So when he did it, someone really had to tell me why he was doing it, that’s how much I didn’t know what was going on.

And I kind of still don’t, so, someone had to explain it to me, are you kneeling because of the Black Lives Matter thing, or that whole wave of whatever.  That whole wave just went right by me, way too fast to even give an opinion, so I was just like, ‘oh, okay, that’s what’s happening.”

Skip Bayless: You’re a deep thinker on these issues, so step back from all of it, and I know this is a very broad question, but… where are we in the United States of America, in race relations, and what you see from day-to-day in your life?

“These 33 years have been nothing but a blessing, I have never — and never is a strong word — never dealt with racism, and I’m glad I didn’t have to.”

Lil Wayne: [pauses, sighs].  Skip, they wouldn’t want to ask me that, they wouldn’t want my answer represented because… [pause, sigh] God knows I’ve been nothing but blessed, my whole path.  These 33 years have been nothing but a blessing, I have never — and never is a strong word — never dealt with racism, and I’m glad I didn’t have to.   And I don’t know if it’s because of my blessings, I don’t know, but it is my reality.   So, I’d have to say, that not only had I thought it was over, I believe it’s over, but obviously, it isn’t.”

Skip Bayless: So you’ve never experienced any offensive behavior from any other color —

Skip Bayless: Wow.  You are blessed.

Shannon Sharpe: But you still see what is going on, even in your city, New Orleans, with Alton Sterling, the — during Katrina, the officers that killed those and ended up in jail, so —

Sharpe: — we, I know you say you’re not paying attention to it.  But you see some things —

Lil Wayne: As far as — we all want someone to figure out what’s going on first, then put a stop to it or try to put a stop to it, everybody come together and figure something out.  And maybe coming together is the solution, but we have to do that first.  And obviously we have a lot of differences, people feeling this way, people feeling that way, but when you come to a person like me, my answer’s always the same.  My politics, my nation, my flag, my world, all that, it’s Reginae, Cameron, Neal, and his brother, Tony, that’s my nation, that’s my flag, that’s my world.  That’s all that matters, those four kids to me.

Skip Bayless: So, go one level deeper with me.  I remember one time I saw you after you’d done a concert, I think it was in Westchester.  Different kind of neighborhood.  But I asked you, what is the racial breakdown of this audience?  And you told me that the only black face you could seen in the audience was your make-up artist, do you remember that?  And she was in the front row, right?  A lot of white kids like rap, right?  Explain that, what message does that send to you, what’s the bigger picture of it?

“…there’s no such thing as racism.”

Sharpe: How you treat people —

Skip: Shannon, how do you feel about what Wayne is saying?

Sharpe: Well, a man can only speak about his experiences, and as I alluded to, I come from rural south Georgia, I’ve been called things, I’ve experienced things, and sometimes you can only see things through the eyes of the man that cried.  So if this man hasn’t experienced racism, hasn’t been called by name, he’s doing right by not making up a story.  I commend him, he’s from New Orleans, what Ward are you from?

Sharpe: 17th Ward.  We know what it’s like in New Orleans.  Although he hasn’t experienced that, he’s not going to embellish on national television in order to further advance the conversation.  Then people are going to say, ‘see, there’s Lil Wayne, not only do we have an athlete, we have a prominent entertainer, a very prominent figure who’s also experienced [racism]’.

So I commend him, if he’s never — kudos to you in 33 years, I’m 48 years from rural south Georgia, and if you don’t think it’s alive and well, check my timeline.  Check my timeline.  When Skip and I had this discussion last year, they still used the n- word, they still called you the animal with the ring around its tail.  Hey, do you?  That makes you feel better, I think that says a lot more about you than me, but I’m cool with it, it’s not going to stop me from doing what I’m doing.

Skip Bayless: Shannon, does it give you — any glimmer of hope what he’s saying about his generation, the Millennial generation?

Sharpe: Yes, I’m a firm believer that racism, bigotry, is a learned, taught emotion.  So if you don’t teach someone to do that, they won’t extend that, so it’s gotta stop somewhere.  But you have to understand that this has been going on for such a long, long time, you have 400 plus years of this in the US.  People were fighting over this in Biblical times, people were divided then.

And so, like I said, I commend you, I’m glad you’re speaking, you’re not embellishing a story, being from New Orleans, experiencing what you’ve experienced.  I remember reading that you shot yourself.  But racism is real.  He knows it’s real, although he hasn’t experienced it.

Lil Wayne: That said, that day, that I shot myself.  I was the only person in the house.  The police came through there, they knocked the door down.  I was on the floor.  They all hopped over me, looking for the drugs, looking for this and that.

It was a white police officer who said, ‘what the f–k are you guys doing? Do you not see this baby on the floor?’  They said, ‘we called the ambulance.’

‘Ambulance? He has a hole in his chest!’ He picked me up, he took me to the hospital himself.   He was white.