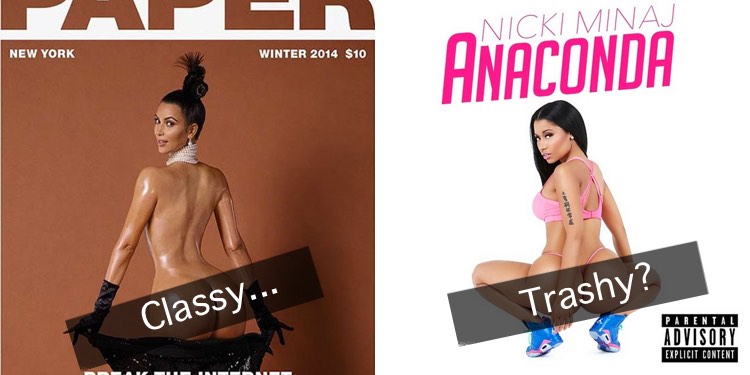 Does society have a double-standard when it comes to women and race?  In a recent interview, Nicki Minaj says that white women like Kim Kardashian are treated entirely different than black women.

Both are voluptuous bombshells and sex symbols of our generation.  So why is one treated so differently than the other?

According to Nicki Minaj this all boils down to race.

After all, both women are of similar age, similar build, and equally powerful curvatures.  So why the different yardstick?  “When Kim Kardashian’s naked picture came out, [Sharon Osbourne] praised it, and my fans attacked her for being such a hypocrite,” Minaj recently told Marie Claire.

“So it wasn’t trashy and raunchy when a white woman did it, but it was when a black woman did it?  It’s quite pathetic and sad, but that is my reality, and I’ve gotten accustomed to just shutting it down.”

This isn’t the first time Nicki Minaj has attacked along sensitive racial lines, with Kim Kardashian just one of several targets.  Last year, Minaj flamed a beef involving Taylor Swift over race and body type.  “If your video celebrates women with very slim bodies, you will be nominated for vid of the year,” Minaj tweeted.

That immediately drew criticism from Swift for being divisive and bad for women, though Minaj said she wasn’t even referring to Swift.  Great Twitter gotcha, then the world moved on.

But where’s the black socialite?

Perhaps the bigger question is whether the world is truly ready for a black female socialite.  What started with Paris Hilton has shifted to Kim Kardashian, with both attacked for not accomplishing much beyond game.  Nicki Minaj, on the other hand, achieved fame based on rap and style, with fame following.

But Minaj feels that many women may be short-changing themselves that attaching themselves to men.  Nicki Minaj cites rapper Jay Z as a major inspiration, but wonders why more women aren’t in the same category.  “I don’t need to read a book about [business],” Minaj said.

“I can look at someone’s career and just pinpoint the dos and the don’ts, and the one person I’ve done that with for my entire career was Jay Z. He did such a great job being an authentic street guy and a businessman, and I was like, Why aren’t there women doing that, taking the success from rap and channeling it into their empire? I felt like anything he could do, I could do.”