The AirPod was a courageous decision. The delay? Maybe not so much.

I’ll be honest. I’m an avid video gamer, so I’m used to delays from big companies: Bethesda, Ubisoft, Electronics Arts, and (most notoriously) Blizzard-Activision. How about Apple?  Not so much.

Apple released a statement today, announcing that they’re delaying the AirPods. The reason? They need time to perfect the product. Take a look.

“The early response to AirPods has been incredible. We don’t believe in shipping a product before it’s ready, and we need a little more time before AirPods are ready for our customers.”

There’s no release date yet available. The AirPod (not to be confused with the car) were expected to be released this month.

When the Air Pods were announced, the internet went into a collective frenzy.  Users posted images of homemade Air Pods with wires cut off.  Others used electric toothbrushes.  Several proclaimed that wired headphones were dead. My personal favorite?

Courage is buying the $159 Apple Air Pods and then going home to tell your spouse what you bought and for how much. #AppleEvent

The news comes right after Apple released their 4Q earnings on Tuesday.

“Our results for the September quarter were very strong. We’re thrilled with the customer response to iPhone 7 and iPhone 7 Plus; these are the best iPhones we’ve ever made.”

Yet at the same time the company appears to post high revenue numbers, MarketWatch is reporting that Apple actually increased their debt. Their bond sales added $6.5 billion to its total debt. 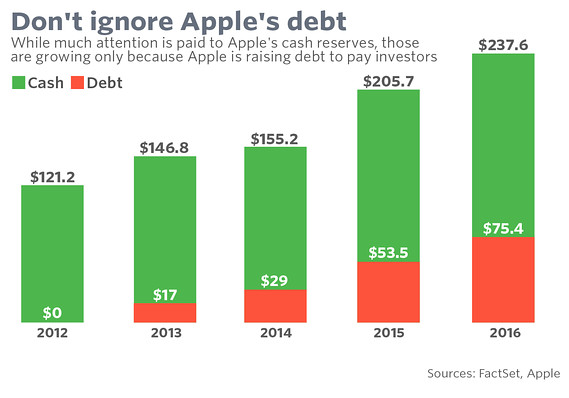 It’s not difficult to find out why. Taking a look at the core sales numbers for their products, Apple only sold 45.513 new iPhones last quarter. While this number is very high and strong for the company, it’s actually down 5.3% on the same quarter last year. This number seems to show that iPhones sales are actually slowing down. In Q4 2015, the company sold 48.046 million iPhones.

On iPhone sales, the device brought in $28.16 billion in revenue this quarter. Once again, this is a drop over last year, when the iPhone brought in $32.209 billion in Q4 2015 sales. According to Macworld, these numbers are actually disappointing for the company. Asleigh Allsopp wrote,

“…the importance of the iPhone to Apple’s fortunes is such that even this small dip in sales is a little worrying.”

“we’re off to a great start with Apple Watch Series 2.”

According to MacWorld, though, the maximum revenue Apple might have made from the Apple Watch is a minor $2.373 billion. Overall revenue for “Other Products” is the same number, down from $3.048 in Q4 2015. However, “Other Products” also include iPods, Apple TV, routers, and different accessories.

In good news for the company, Tim Cook said that Q4 was a record-setting quarter for company services. They reported $6.325 in revenue, up 24% from Q4 2015. The reason? Apple Music. The music streaming service grew 22%. According to Cook, Apple Pay transactions were up almost 500% for September when compared to September 2015.

As of writing, the stock (AAPL) is down 0.49%, from its open price of $115.39. The current trading price is $115.02. Yesterday, Apple slumped $2.85, or 2.4%. It was the biggest drag on the Dow Jones Industrial Average, according to MarketWatch. This was also the biggest daily percentage loss since September 9, two days after their keynote. This appears to be a punishment on the company. Senior Portfolio Manager at Gradient Investments LLC, Michael Binger, said,

“The quarter wasn’t bad to me, but if you’re going to report a quarter after a [share] rise of this much in this short of time, then it has to be a powerful one. Instead, this was just lukewarm.”

Despite these disappointing numbers for the third straight quarter, Tim Cook still proclaimed 2016,