Bono Wins His Most Prestigious Award Yet. You Won’t Believe What It Is… 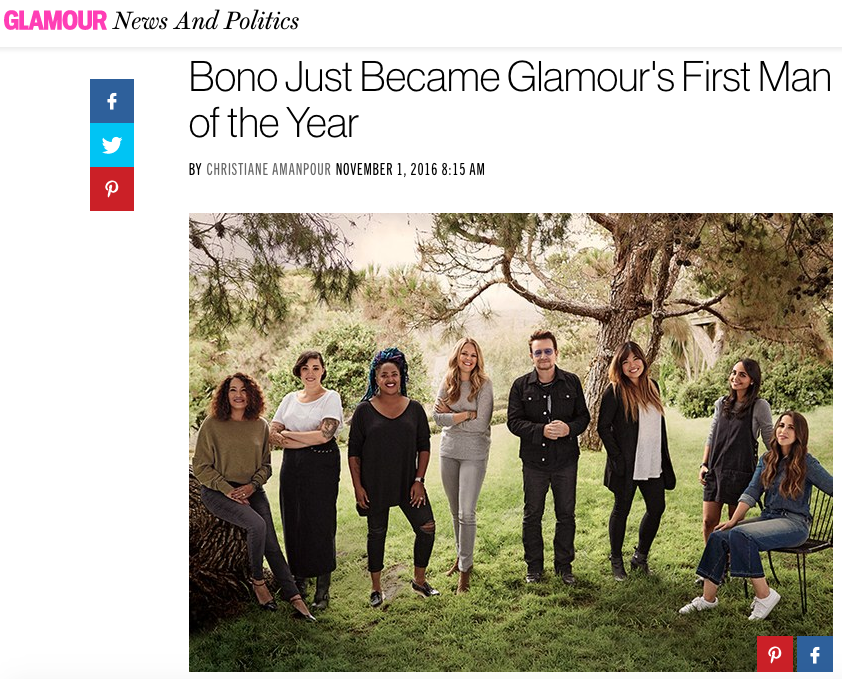 Women are up in arms!  Glamour says Bono has done more for women than any woman.  But should he be awarded the ‘Woman of the Year’ award?

Glamour is now catching some serious heat for doing the unthinkable.  Just this morning, the magazine awarded its ‘Woman of the Year’ accolades to Bono.  Of course, a guy.

The reason, according to the magazine’s publisher, is that Bono is doing the most for women.  In fact, more than any other woman. Here’s their statement on how they arrived at a man.

“For the first time, the awards also honor a man. For years our Women of the Year Advisory Board—made up of past winners, plus our editors—has put the kibosh on naming a Man of the Year on the grounds that men aren’t exactly hurting for awards in this world, and that here at Glamour, the tribe we’re into celebrating is female. But these days most women want men—no, need men—in our tribe…

“We’re proud to name that rock star, Bono, our first Man of the Year.”

But is that sexist?

That’s been one of many reactions.  But ironically, Bono’s ‘Poverty Is Sexist’ campaign is one of the major reasons for the award.  “Bono has created Poverty Is Sexist, a campaign specifically aimed at helping the world’s poorest women—those who survive on less than $2 a day,” the magazine’s editors continued.  “The campaign’s first order of business: to document a clear link between poverty and gender, and send that data to every president and prime minister in the world.”

“By establishing Poverty Is Sexist, Bono is making it clear that powerful men can, and should, take on these deep-rooted issues.”

Beyond the gender-crossing controversy, the selection raises some other thorny issues.  The singer has been routinely accused of tax-dodging in his home country of Ireland, while accosting local authorities for mishandling and funneling tax revenues.  An outspoken defender of the environment, Bono is known to commandeer private jets to his far-flung, heavily produced tour dates.

And the biggest problem is one of effectiveness.  Does Bono actually accomplish anything?  Or, is he another Western interloper in African issues, full of flash but not much substantive change?  All questions worth asking, especially if you’re an African leader taking a lecture from a pop singer.

Maybe those are more important issues, greater than any artificial gender divide.