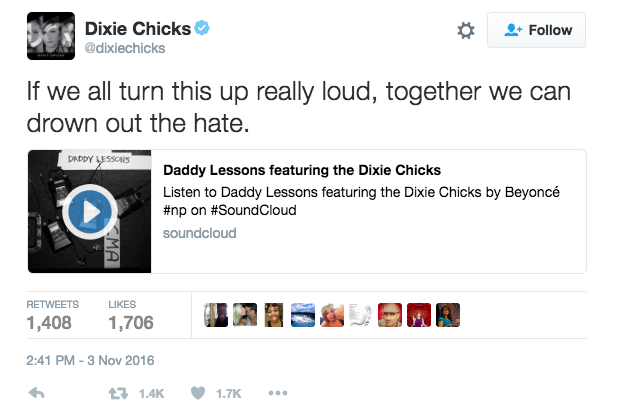 Breaking: the Country Music Awards are now denying the removal of ALL Beyonce mentions from their site, Twitter and Instagram accounts.  Co-performers the Dixie Chicks say the CMAs are lying.  The show apparently removed the posts after receiving an onslaught of racist comments.

Please note: the following is a breaking story with hour-by-hour changes.  Please check back as this story is being updated as new developments arise.

The Country Music Awards (CMAs) are now in crisis mode after apparently deleting a series of Twitter, Instagram and potentially other posts related to Beyonce.  Footage and mentions of the artist may have also been scrubbed from the official CMA site.

Beyonce was a marquee performer at awards show, singing alongside the Dixie Chicks.

The CMA scrub was apparently a reaction to a torrent of hatred from country music fans.  Some of those reactions were undoubtedly racist, though others expressed strong opinions related to the singer’s recent political positions.  That includes Beyonce’s ardent backing to the Black Lives Matters movement, and outspoken comments about American police conduct and racism.

Looks like none of that is going down well in the heartland.  Perhaps unsurprisingly, fans sharply slammed the CMAs to the mat for allowing Beyonce access to the show.

The resulting avalanche of hatred is now believed to the be reason why the Country Music Awards pulled the posts.  Now, it also looks like the CMAs are (stupidly) denying the whole thing.

The deleted tweets and Instagrams were noticed a few hours ago.  In response, the CMAs issued a seemingly non-sensical response that has only fueled the fire.  In essence, a CMA spokesperson has denied that the scrub even happened in the first place.  Then, offered a reason why all of the posts were deleted.

“CMA has not erased any mentions of Beyonce’s performance on the CMA Awards.  In advance of the broadcast, CMA removed a five-second promotional clip from ABC.com and CMA’s Facebook page.  The promo was unapproved and CMA removed it prior to the broadcast.  Beyonce’s performance with Dixie Chicks was a highlight of the evening and we are continuing to share the amazing full-length performance clip via our official social channels.”

Beyonce and Dixie Chicks fans sharply questioned that response.  And they’re pointing to a string of deleted posts as evidence.  Meanwhile, the CMAs have re-posted some material, including this Instagram post.

None of it is appeasing waring sides in the debate. 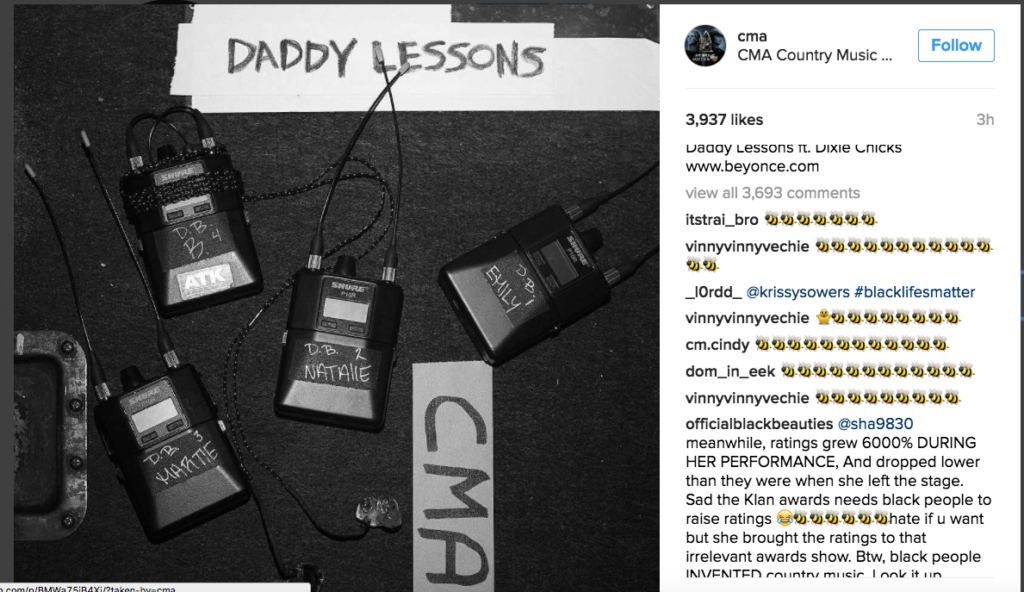 Just 2-3 hours after the re-post, thousands of comments are pouring in.  The extremely racist comments are gone, but we’re not sure if the CMAs are deleting certain comments.  These, however, are very much intact:

The comments section has devolved into a war between Beyonce fans and haters.  During the repost, Beyonce fans were effectively drowning out the backlash with non-stop bee emojis (see above).