Despite a resounding Presidential victory for Donald Trump, many Californians are refusing to accept the result.  Now, a major West Coast rapper is preparing to joining the burgeoning California independence movement, ‘CalExit’.

Updated, Thurs. 2:30 pm PT: Since the publication of this post, several Silicon Valley tycoons have expressed support for the Calexit initiative.  That includes Hyperloop cofounder Shervin Pishevar (mentioned in our initial article), as well as Jason Calacanis and Path co-founder Dave Morin.  Others are expected to join; no word yet on support from the creative (and hip-hop) communities.

The concept is simple: California would secede from the United States of America, leaving 49 states behind.  As the sixth largest economy in the world, California would then exist independently from its ‘Red State’ enemies.

A referendum would happen as early as 2018, creating an independent California by 2019.  And in case you’re wondering, CalExit’s resemblance to ‘Brexit’ was done intentionally.

Already, potential backing and celebrity endorsements are waiting in the wings.  That includes the possible involvement of a major West Coast rapper, according to an early morning tip to Digital Music News.  The rapper, who is solidly anti-Trump, is weighing the details of his involvement and planning a final decision this week.

The rapper’s involvement could rally involvement from other California-based rappers.  At present, it remains unclear if the rapper’s support will be above board, or initially behind-the-scenes through donations and involvement.

One issue for the rapper’s involvement, according to the source, is whether the movement itself has enough steam.  In the coming days, details like the ‘CalExit’ name could change, and a united front of backers could supercharge the movement.  Of course, the Catch 22 here is that the involvement of this musical celebrity would be all it takes to generate substantial momentum.

But there’s also a possible career problem: Red State fans may dislike the idea, and abandon the artist because of his politics.  But that could work both ways, with the rapper solidly ‘repping’ his home state and the West Side.  And, assuming a leadership position in the newly-independent California.

Currently, the concept is trending on Twitter, but too small to be taken seriously.  Perhaps the most serious backer is venture capitalist Shervin Pishevar, who vowed to fund the initiative if Trump prevailed.

But Pishevar only made his vow before Trump emerged victorious.  Will the venture funding heavyweight put his money where his mouth is?

Other proponents of the initiative include heavily-read blogger Perez Hilton.  “Seriously. What are the steps to make this possible??? We must secede!! #Calexit‘,” Hilton expressed. 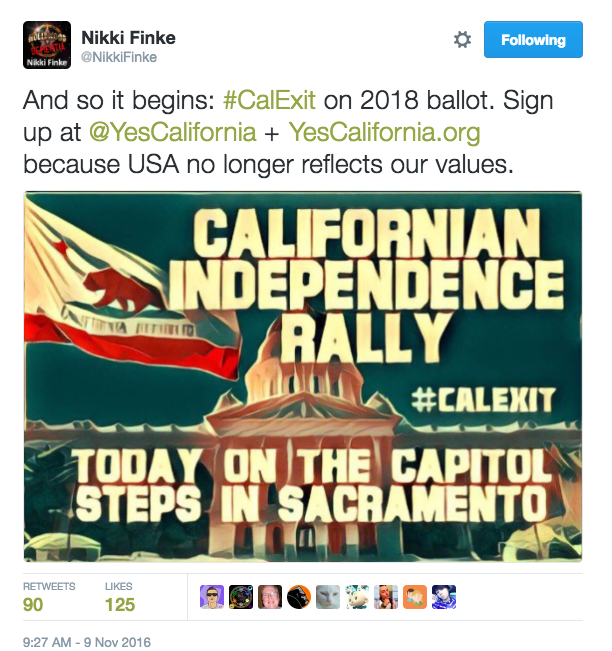 Underlying the frustration is the feeling that California is paying the bills for the Red States, but getting none of the benefits.   Or, receiving a negative return.  Instead, many supporters feel chained to Trump supporters and initiatives that make little sense for Californians.

Maybe this tweet expresses that sense of divide a little better. 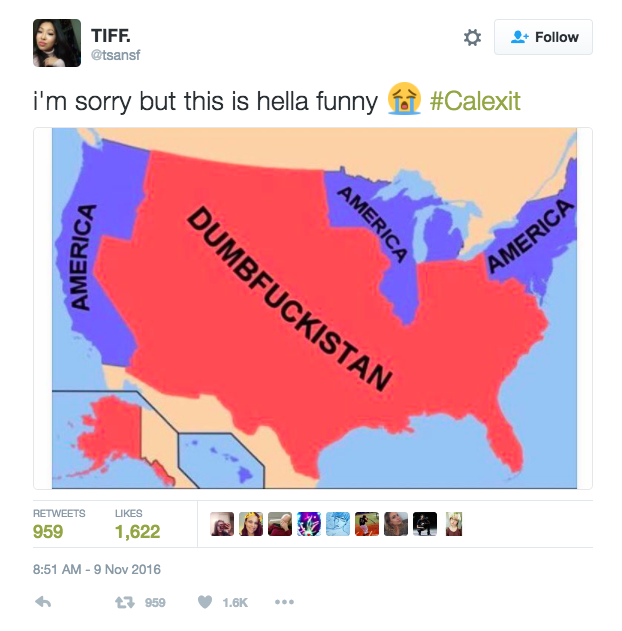