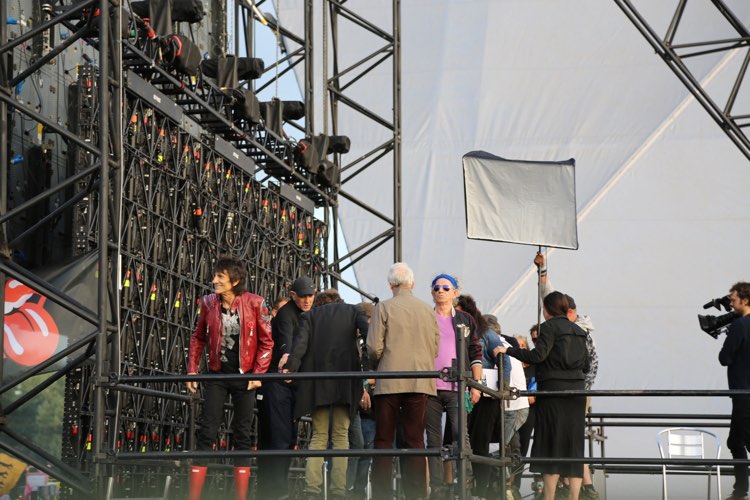 The Rolling Stones preparing to performance at Glastonbury, 2013 (Neil Whitehouse Piper CC by 2.0)

Donald Trump’s favorite song on the campaign trail was ‘You Can’t Always Get What You Want’.  Now, Trump wants the Rolling Stones to perform live at the Presidential Inauguration.

Please note: the following is a developing story. Stay tuned for responses from the band, the Donald Trump transition team, and other sources.

The Rolling Stones will have first dibs on playing Donald Trump’s Presidential Inauguration in January, according to a source speaking to DMN.  The source is dialed into the touring schedule of the band, specifically through massive concert touring agency AEG.   That includes various offers and tour proposals.

The Inauguration offer itself is hard to believe, given a history of animosity between Donald Trump and the Rolling Stones.  But the offer could be construed as an olive branch from Trump, and an opportunity for the Stones to unify warring factions.

An Inauguration performance may also include a juicy paycheck.  During the campaign, Justin Bieber was reportedly offered $5 million to play a Republican event.  The offer was declined, following rumored opposition from manager Scooter Braun.

There are certainly other artists that have been supportive of a Donald Trump presidency.  But the Stones are not only popular, they’re in great performing shape.  Just recently, the Rolling Stones opened Desert Trip in Indio, CA, which was organized by AEG-owned Goldenvoice.  In both weekends, the Stones delivered strong performances, with the 73-year-old Jagger dancing effortlessly on stage.

The Rolling Stones have not responded to an inquiry regarding the reported invitation.

At this stage, it’s unclear what response, if any, the Rolling Stones will have to the invitation.  Throughout the campaign, the band expressed dismay that Donald Trump was repeatedly using their song, ‘You Can’t Always Get What You Want,’ during events.  Other artists mounted similar protests, though US Copyright law allows politicians to play virtually any song at rallies.

Keith Richards took the extra step of publicly denouncing Donald Trump.  “Can you imagine President Trump?” Richard told Vanity Fair.  “The worst nightmare.  But we can’t say that.  Because it could happen.  This is one of the wonders of this country.”

Richards’ hatred for Trump dates back to the 80s, according to the UK-based Daily Mail.

After Election Day, Richards declined to discuss the results.  “It’s a blank spot for me, I ain’t going there,” Richard told the Associated Press.

Other members of the group, most notably Mick Jagger, expressed complete shock at the results, while restraining more ‘flip’ or ‘superficial’ comments.  “Everyone outside the US is kind of mystified, I’d say, that’s the polite word,” Jagger told the Associated Press.

Ronnie Wood compared the result to Brexit in the UK, while Charlie Watts said Trump would likely tone down the rhetoric once in office.  Indeed, the band overall has been dialing towards the apolitical, probably given that many of its fans are Trump supporters.

All of which makes the offer tremendously complicated for the group.  Given the divisive nature of the invitation, the Stones could decline to play.  But that could equally alienate a massive group of Americans.  Either way, the Rolling Stones are staring at a potential ‘third rail,’ and possibly looking for the perfect excuse to decline.