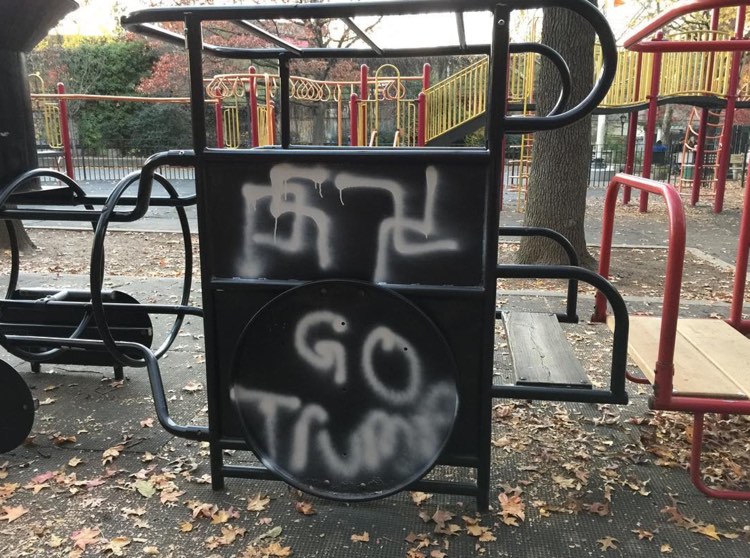 It’s the version of ‘Trump America’ people are fearing the most.  Now, a spate of hate crimes following the election of Donald Trump is spilling into the anti-Semitic.  Just last night, residents of Brooklyn Heights were shocked to find two swastikas and a ‘Go Trump’ message defacing Adam Yauch Park.

Adam Yauch, aka ‘MCA’, was a member of the Beastie Boys who passed away in 2012.  The park was named after Yauch following his passing.

Yauch was Jewish, and cut from the cloth of a very Jewish New York family and culture.  Indeed, he’s one of the most prominent Jewish musicians of the past thirty years.   That makes the presence of swastikas a virulently anti-Semitic act, with a prominent member of the Jewish community singled out.

“Adam Yauch is weeping for our country.”

Meanwhile, the NYPD Hate Crimes Task Force is investigating the matter, while Trump himself has urged his followers to ‘stop it’.

Back in Brooklyn, local leaders are taking this matter very, very seriously.  A rally is slated to take place at Adam Yauch Park on Sunday morning (November 20th), with New York State Senator Daniel Squadron and Congresswoman Nydia Velásquez leading the effort.  “Hate has no place in Brooklyn, NYC, or America,” a flyer promoting the gathering read.

The gathering is slated for 11:30 am ET (see below).  Fellow Beastie Boys member Ad Rock is slated to speak at the event (we’ll have full coverage). 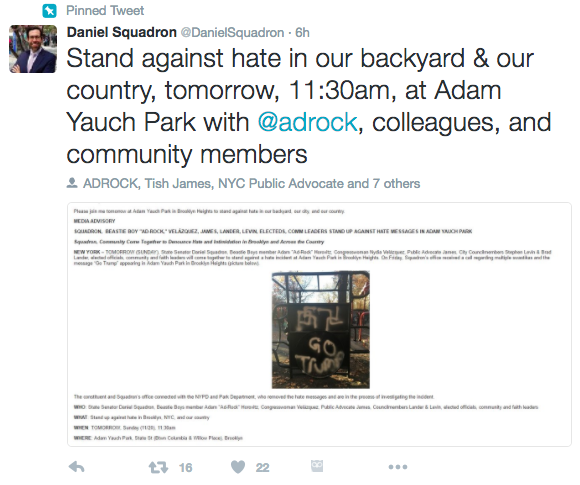 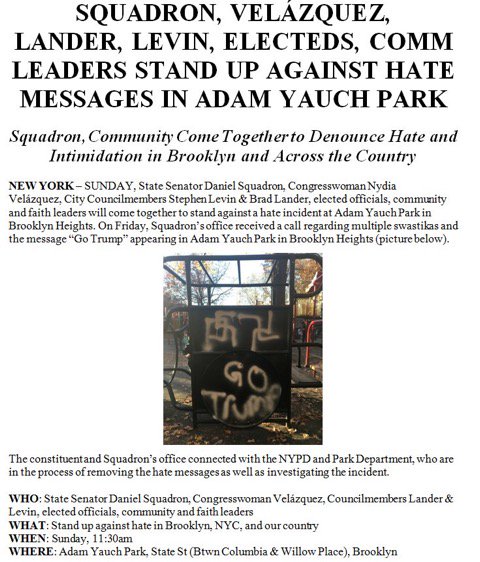 “I’m assuming that we’re all here today ’cause we’re thinking the same thing: spray-painting swastikas at a children’s playground is a messed up thing to do … This is about hate crimes towards Muslims soaring to their highest levels since 9/11. We elected a president that is giving our children the message that it’s OK to attack people of color. This is real. We’ve gotta stand up against hate. If you’re able to give money, give to Black Lives Matter. If you’re able to protest, protest. If you’re able to volunteer, volunteer.”

Once discovered, the swastikas were quickly removed.  Once the black paint was dried, hearts adorned the once-defaced area. 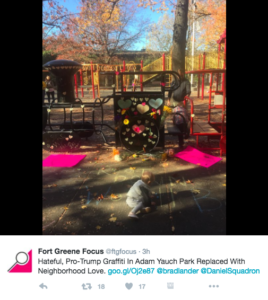