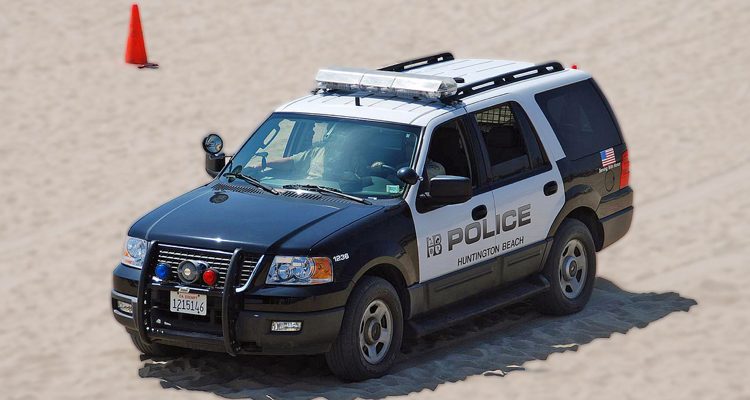 How did a loaded revolver get from this vehicle into the home of Soulja Boy?  The answer to that question could put the rapper in prison for 4 years.

Soulja Boy is now in the crosshairs of  a pretty sticky situation.  And unfortunately for Soulja Boy, the ‘smoking gun’ was stolen from the cops!

Exactly how the weapon was removed from the possession of a Huntington Beach police officer (or vehicle) remains unclear.  Even more perplexing is how the loaded weapon then ended up in Soulja Boy’s residence in Studio City, more than an hour away.

What we do know is that authorities obtained a warrant after receiving a tip.  They subsequently raided the rapper’s house before conducting a search and discovering the contraband.

Aside from the police pistol, Soulja Boy was also found to be in possession of a ‘military-style handgun’.  The police weapon is a .45-caliber Glock 21, while the military weapon is a “Mini Draco AR-IS”.  Neither seem to be suitable for deer hunting in the surrounding Los Angeles woods.

According to the Los Angeles County District Attorney’s Office, the rapper now faces two felony counts (one for each weapon).  Beyond that, there’s a misdemeanor charge for receiving stolen property, among other charges.  All of that could result in a four-year prison term, which could bury Soulja Boy’s career.

Soulja Boy, whose real name is DeAndre Cortez Way, has a long history of run-ins with the cops.  In 2011, Way received felony weapons and drug charges after a traffic incident in Georgia.  A string of issues in the Los Angeles area soon followed, including a 2014 concealed weapons charge.

That triggered a two-year parole, slated to end in December of last year.

Already, the rapper has pled not guilty in an arraignment hearing on Monday.  Next up: a court date on February 28th.