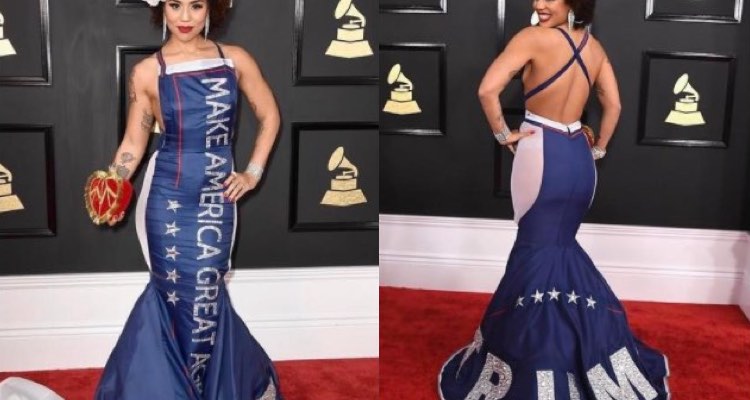 What happens when you wear a pro-Trump ‘Make America Great Again’ dress at an anti-Trump event?  Just ask Joy Villa.

American singer Joy Villa, also known as Princess Joy Villa, is a relatively unknown singer.  Or at least she was, prior to the 59th Grammy Awards.  The Grammy-nominated singer wore a provocative dress designed by Andre Soriano.

None of those really worked.  There wasn’t enough shock value.  The Trump stunt, however, got the attention Villa was looking for.

If the album continues on its upward sales trend, it would become a top 10 debut for Villa with 35,000 copies moved.  It would also mark the first time the singer has landed on the Billboard chart.

Sales for the $4.99 album appear to be coming entirely from pro-Trump supporters.  In fact, very few of them had even heard of the singer beforehand.  The latest five-star reviews on iTunes read:

I adore this lady. She wore a MAGA gown to the Grammys! I love her. I just bought all her stuff on iTunes.

Thank you for Supporting TRUMP!! Will buy from now! Thanks!”

Also Read:  An Ex-Nissan Exec on the Lam Escaped Japan Inside a Yamaha Bass Case

The MAGA may have prompted a temporary increase in sales.  However, will the move work her career in the long-term?  And, is any of this about the music?

“I was tired of the bullying. I was tired of being pushed down so that I couldn’t say my beliefs. And being fearful of losing sales. Losing fans. Losing bookings [and] contracts and sponsorship.  You know, that’s my day to day.  And a lot of my friends have the same thing.  And we live in Hollywood, which is supposed to be the most open viewpoint city.  But the truth is there was a lot of hate and a lot of negativity and I wanted to change the storyline to love and support and unity as an American.”

Villa told reporter Aaron Klein that she wore the dress to bring people together and start a dialogue.