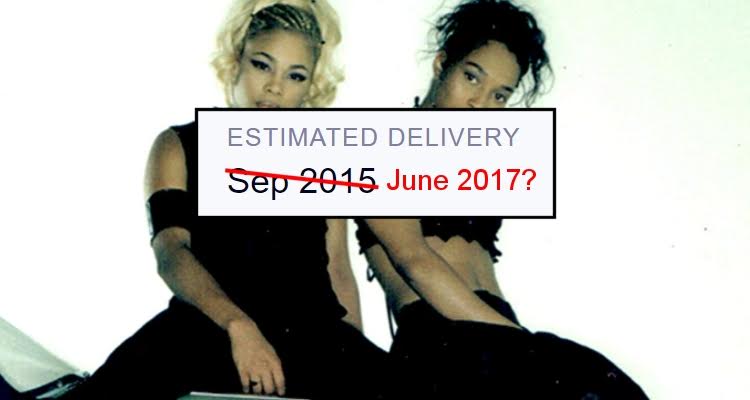 Is TLC finally giving their dedicated fans something for that $430,000 they took from them two years ago? Maybe, but then again… maybe not.

TLC fans are “tentatively” about to see some light at the end of a long, dark tunnel.  This week, the manager of the famed 90s girl group, Bill Diggins, broke an 8 month silence to let Kickstarter backers know that album they ponied up money for in 2015 finally has a release month… sort of.

But first, a quick recap.

Two years ago, T-Boz and Chilli, the T and C in TLC, completed a Kickstarter campaign that raised $430,000 to make their next/final album (they posted the final update February 20th).  A lot has happened in the entertainment world in two years: two new Star Wars movies have come out, 32 episodes of ‘The Walking Dead’ have aired, and Drake released 34 songs between an album, a mixtape, AND three singles from his upcoming “playlist” (whatever the difference between any of that is anymore).

But you know what hasn’t been released? A TLC album.

Why so long? Bill Diggins explains:

When we decided to do the album it was based on a number of emotional decisions and one of the biggest was how you inspired T-Boz and Chilli by your emails and texts asking them to do another album.  At the time we had no music, no producers, no writers, and a few ideas.

For those not familiar with my rants about crowdfunding, the tl;dr version is “I’m against it”.  Especially when there are no guarantees or even expectations that the project has even been started.  Is that a good excuse?  You just admitted that two millionaires asked for money from their fans with nothing ready except “a few ideas”.  Any other Kickstarter would get laughed off the site without some sort of proof that the project is moving forward.

I’m going to be that asshole.  But how long does it take and how much money does it cost to write and record a couple of songs?

Gucci Mane, a man with a tattoo of an ice cream cone on his face, dropped 1st Day Out Tha Feds literally the first day he was released from a federal penitentiary.  If he’s lucky, he got paid in cigarettes while he was working on it in the joint.  And sure, he probably had more time on his hands, but what’s TLC’s excuse?

TLC created the Kickstarter because they felt it was integral that they make this an event for fans rather than just another CD release (good idea, since no one cares about CD releases because it’s not 1996).  They were so excited to do this for and with the fans.

“Now Kickstarter allows us to directly connect with you. Send us Kickstarter messages, write comments, check out our updates. It will be fun :)”

FUN, they said with a smiley face. So much fun in fact that before this week, they hadn’t updated their fans via Kickstarter since June of 2016, with a post titled “Coming Rewards” which was for backers only.

Obviously these rewards are taking a while to come (a problem that happens when you get older), with comments on their Kickstarter page such as these:

“Two years later. Pledged and paid for the signed album.  Was supposed to get it as well as all the offerings up to that price point.  Two years later.  I got a link to a PDF on all of their favorite songs.  Two years.  $110 for a list of songs”

“They should come here and finish what they’ve started.  Start with kickstarter so inform via kickstarter as well.  People shouldn’t be coming TO YOU for updates, you come to them.  They have no respect for their backers”

“I pledged money two years ago.  They haven’t even sent us an update in seven months.  What’s the story???  We just want to know what happened to our money?  It’s so heartbreaking.”

Not T-Boz or Chili, not one of the two girls who were ready to have “fun” interacting with you, the fans, through this process.  And the update claims a tentative release date of 3 months from now.  Why not now?  The website Cyber TLC World (wait, we’re sure it’s not 1996, right?) quotes T-Boz as saying this in January of this year:

What politics?  You got paid nearly half a million dollars from fans to make an album.  Are these the same “politics” that forced you to release two singles off the album to iTunes Japan before your backers got their rewards?  Yeah, a pretty scummy move.  Make more money off people before finally giving the fans who already spent their money what they paid for.

The whole reason they claimed they wanted to raise money via Kickstarter was because they wanted to release an album on their own terms, without label interference.  If it’s done, they could slap the fucker on iTunes tomorrow.  They could upload it to Bandcamp today.

Funny enough, I reached out to Bill Diggins last week and asked him some questions:

He sent me a fairly cookie cutter statement and told me he would get back to me in a week with more detailed answers.  6 days later, he posted this update.  Did my e-mail pressure him into posting this update, trying to get out ahead of what he felt might be negative press coming TLC’s way from a major music news outlet?  Nah, probably just a coincidence that no one’s heard from them in 8 months and NOW they decide to comment on the album.

So, happy 2nd anniversary to those of you who gave money to a couple millionaires to create an album that they should have been more than capable of delivering by now.

If you’re lucky, they’ll actually hit the target date of June-something-or-other and you’ll actually get the album before the 3rd one.