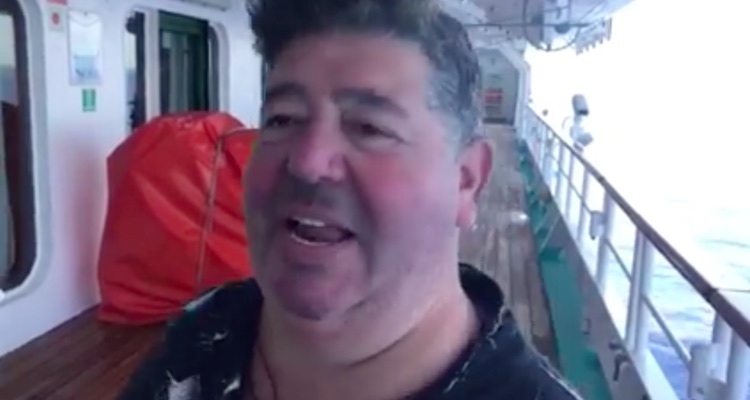 Trump ‘fixer’ Rob Goldstone may have just stepped in a very serious pile of crap.  With open-toed sandals.

For those just tuning in, British-born music publicist Rob Goldstone is now a central figure in possible Russian meddling in the 2016 US Presidential Election.  According to a trove of damning emails, Goldstone is credited with arranging a meeting between Russian attorney Natalia Veselnitskaya and Donald Trump, Jr., shortly after Donald Trump’s nomination by the Republican Party.

Goldstone and his music publicity firm, Oui 2 Entertainment Ltd., worked with the Trump-owned Miss Universe in the past.  His connections to Trump and his associates remain active.

So is facilitating the transfer of confidential information about a prominent American presidential candidate, based on espionage tactics like hacking and other spy intel.

Veselnitskaya is a Kremlin insider.  In emails, Goldstone promised that Veselnitskaya had critical information on Russia’s ongoing efforts to manipulate the US election in Trump’s favor.  He even referred to her as a “Russian government attorney”.

In email communication with Donald Trump, Jr., Goldstone also promised damaging information about Democratic Party candidate Hillary Clinton.  Documents presented “would incriminate Hillary and her dealings with Russia and would be very useful to your father,” per Goldstone.  “This is obviously very high level and sensitive information but is part of Russia and its government’s support for Mr. Trump.”

Currently, the US Justice Department and the House and Senate Intelligence Committees are investigating Russian meddling in the US election.  US intelligence agencies have determined that meddling occurred.  They’re just not sure whether Trump or his campaign were knowingly participating.

Maybe Goldstone is the lynchpin that answers some of those questions.

Effectively, Goldstone was not only obtaining highly-sensitive information, he strongly pointed to a Russian effort to sway the US Presidential Election.  Additionally, he was aiding Russia in its efforts by coordinating discussions with Trump’s son.  Those sound like pretty serious crimes, including meddling with a federal election.

Several US Congressman are accusing Donald Trump, Jr., of treason, though that might be a stretch.

We don’t know exactly what was discussed in the actual meeting, which also involved Jared Kushner and campaign manager Paul Manafort.  But if the discussion delved into election meddling, the results could be extremely draconian for Goldstone.  And depending on how this cookie crumbles, Goldstone could potentially receive felony charges if the facts of this case reveal that information designed to damage the United States and its Presidential election process was indeed being exchanged.

‘Crimes Against the Government’

Enter the United States Espionage Act, a body of anti-espionage statutes that outlines severe penalties for anyone attempting ‘Crimes Against the Government’.  Is coordinating with a foreign nation to sway a US Presidential Election a ‘Crime Against the Government’?  As Congress now wrestles with the details of this ugly situation, Goldstone’s ‘rock star’ handshake could viewed as a serious crime against the United States, its democratic process, and its national security.

Actually, serious treason and felony espionage could result in death during an earlier chapter of American history.  But those charges may not fit in this case.