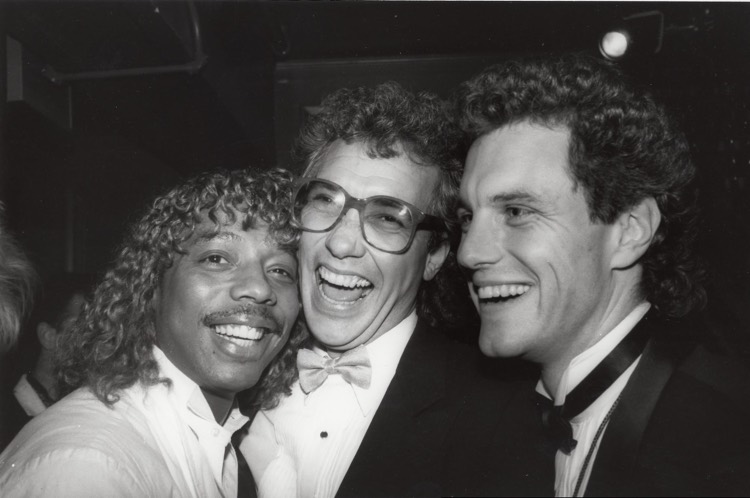 MTV co-founder Les Garland (c) laughs with Rick James and exec John Sykes in 1984.  The network has been accused of racism against black artists (photo provided by Garland).

Was MTV purposely sidelining black artists in the 1980s?  That all depends on who you talk to.

Music Television (MTV) started ‘disrupting’ before that was a thing.

The edgy, groundbreaking channel forever transformed music into a multimedia experience.  And as its importance grew, so did visually-savvy artists like Madonna, Duran Duran, David Bowie, and Peter Gabriel.  In fact, artists who didn’t have a visual aesthetic were often left behind in the MTV era, especially among younger fans.

It was a brand-new music video revolution.  But were black artists being left out of the party?

That’s the accusation of a pioneering deejay of the time, GrandMixer DXT.  DXT was a skilled scratch DJ; a pioneering artist who blended his sound into legendary songs like Herbie Hancock’s ‘Rock It’.  But while MTV played ‘Rock It’ repeatedly, DXT argues that they purposely edited out its black creator.

In a hard-hitting interview with the Murder Master Music Show last month, DXT blasted the channel for keeping black artists out.

“The truth is MTV at the time didn’t play black people.  In 1983, MTV did not play black people.  Rick James had to sue them.  Let’s think about that for a minute and the insanity and how it affects progress.  You didn’t see me and the most you seen Herbie was on a little screen that you could barely see and that happened because of racism.

“That bothers me to this day!  It’s a form of insanity!  Your color is not the right color so we are gonna alter history.”

‘Rock It’ was a hugely popular video of the time (you can check it out here).  But after DXT’s accusations, a major figure in MTV’s history blasted back.  In an email to Digital Music News, channel co-founder Les Garland dismissed the accusations outright, and denied that any exclusion was happening.  He even accused DMN of bandying ‘fake news’.

“That’s a serious and non-factual accusation that’s been refuted for decades.  Simple fact-checking would reveal that Herbie Hancock’s ‘Rock It’ was a huge award winning song AND music video recognized with five MTV video music awards along with a Grammy.  Another thing, my friend Rick James did NOT sue MTV.

“I’d have say your article is ‘fake news’.  I’m sorry Mr. Grandmaster DXT, your allegations are NOT accurate or truthful.”

Garland ended the note by including a picture with Rick James and fellow MTV executive John Sykes.  In subsequent comments, readers alternatively defended or vilified the network (you can check out that debate here).

Now, DXT has jumped back into the debate.  Partly to apologize for falsely noting that Rick James sued the channel.  But mostly to double-down on his very serious accusations.

“Him [Les Garland], to respond and not acknowledge what actually happened in the history that was skewed… it makes it crazy.   Because he is not owning up to the reality of our experience.  It goes to show he did not experience what we experienced.  He doesn’t have to walk out of his house and have to go through that.  That’s where the conversation is necessary.
I take full responsibility for the Rick James statement.  Because I should have researched that even more because the narrative all these years was that he sued them.  But he threatened to sue them.  He didn’t actually sue them, he threatened to sue them, and I will take responsibility for saying he sued them but he didn’t.  But that was the only thing that wasn’t truthful.
We can remove the Rick James thing out of it and we are just left with the truth.  And the truth is that during that time, we actually did the research, the first day of MTV not one black artist appeared on the channel.
The only black person that appeared on the first day was a musician in one of the bands.  One guy!
It’s not even a debatable thing.  His response is unfortunate, because MTV did great things once they got over that hump of that mindset.  It changed and MTV became one of the great platforms for the hip-hop movement and I don’t hold no grudge against MTV.  That is not the reason why I said what I said  It was about the behavior and the consciousness and how people were functioning based on the color of people’s skin.  And it’s insanity.
His response to it shows clearly that it hasn’t ended because he is completely in denial of the situation.”

Les Garland has not yet responded (though he’s got our email).