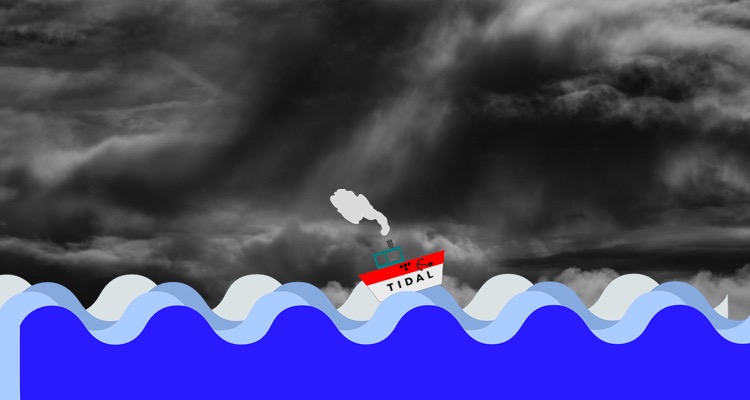 Why is TIDAL floundering while Spotify is soaring?  Why is TIDAL a marginal, relatively unknown streaming service while Apple Music enjoys breakthrough gains?

Streaming music is exploding.  Why is TIDAL struggling?

I hope you will consider these suggestions as you assume the reigns at a streaming service that could be great.

We get a ton of emails from pissed-off rights owners telling us that TIDAL doesn’t pay them.  On time, or at all.  And they don’t trust your royalty statements.

That’s not a problem.  It’s a ticking nuclear bomb.

2. Stop lying about your subscriber numbers.

Nobody really knows how many paying subscribers TIDAL has.  That’s because your numbers are very likely fabricated (and if you don’t believe that, read this).

The era of hyped-up BS that nobody fact-checks ended in 1998.  Stop telling us there are a million subscribers in Poland when it’s obvious bullshit.

Exclusives are ridiculous and the industry hates them.  The only upside is that artists get paid handsomely for their work.  But that’s really it.

Apple Music and Spotify have stopped doing them.

4:44 proves the point in spades.  So does The Life of Pablo.  These restricted releases are bad for the music industry, bad for music fans, and single-handedly guarantee that the next exclusive won’t be yours.

Jay-Z hoisted up a platinum plaque for 4:44 before it was even certified.  And once it was certified platinum, everyone called BS.  Sprint bought all the copies.  And in-between this ridiculousness, 4:44 was plastered on buses and trains nationwide but limited to Sprint-subscribing TIDAL users.

5. Stop making TIDAL a commodity.  Instead, make it a community.

Why doesn’t the world care about TIDAL?  Because they already have Apple Music, Amazon Music, Google Play, and Spotify.  And YouTube, and SoundCloud, and Napster, and Deezer, and…

TIDAL cannot, and should not, be attempting to compete with that.

It’s a truism of business: commodities only compete on price. Nothing more.  But wait: Spotify is better than in many ways.  And more popular.  And, cheaper.

Why is Spotify better?  Well, they have more money, more ingenuity, greater focus, and greater momentum behind them.  Spotify, for example, has relevant playlists and a networking effect, not to mention an extremely reliable service.  Apple Music has complementary radio aspects, while Amazon can be bundled with Prime.

Commodities are lifeless.  Communities aren’t.  And TIDAL can definitely be the latter.

How do I know this?  I’m sitting in the same office as a TIDAL subscriber who only subscribes because of superior audio quality.  And as streaming explodes, there will be plenty of niches to satisfy.  Audiophiles is one, and your company is already well on its way towards serving them.

So why not double down on that?  Be the service that has triple the fidelity and doesn’t compromise.  Spotify has 320kbps.  That’s sucky to TIDAL users.

What other niches are out there?

Well, Spotify is killing it with Rap Caviar.  But there’s so much missing on the hip-hop front.  Which would explain why so many mixtape apps are doing so well.  You don’t just want the latest Lil Uzi Vert track.  You want ALL the Lil Uzi Vert tracks, instrumentals, remixes, collaborations, videos, etc.

TIDAL started in rap.  Why not CRUSH that genre and put Spotify’s everyman approach to shame?

Spotify is going to start getting gated albums that are only available to paying subscribers.  You should be demanding those releases at the same time.

Want to really win this game?  Start doing deals with artists that matter.  Give them upfront cash, and give them freedom.  But insist that their music is freely available on TIDAL in perpetuity.

It’s TIDAL Records.  And it’s the best deal in town.

Then negotiate their deals with other streaming services.  Or let them do it.   Your royalty costs go down, and your support for the artist community goes up.

Actually, there’s another way to differentiate your service.  Give it away!

But not with advertising.

Sprint owns 1/3rd of Tidal.  So why not give every Sprint subscriber a free account?  Suddenly you’re competing head-to-head with every streaming music service, and booming your numbers.  Sprint gets more subscribers, you get more subscribers, and everybody wins.

Spotify wants an IPO.  Their executives want to become billionaires and their investors want a 10X return.  What does TIDAL want?

If that is ‘IPO,’ then at least do that.  If it’s ‘a great place for artists,’ then build that.  But right now, there’s nothing to rally around.  There’s no community, no mission, nothing that makes TIDAL a better, cooler, more interesting place.  And that’s a big problem.

Anyway, congrats on the new job.  And thanks for at least considering these suggestions.