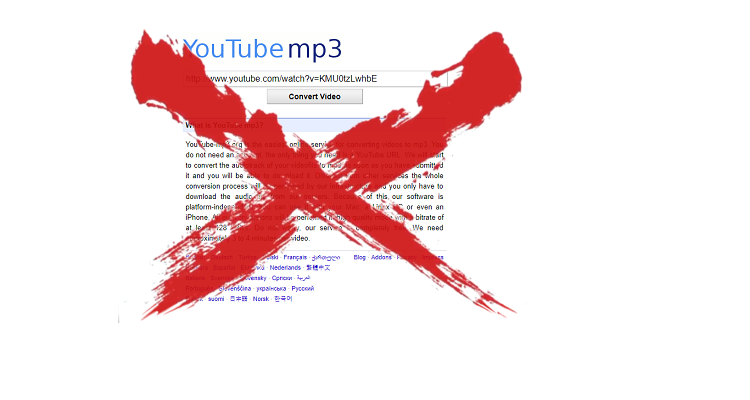 After a lengthy courtroom battle, the largest YouTube to MP3 stream ripper has agreed to take the full blame for copyright infringement.

Each day, millions of people head to YouTube-mp3.org to rip their favorite videos into MP3 files.  Now, in a proposed settlement agreement, site owner Philip Matesanz has agreed to shut down the popular site.

A coalition of major labels had previously sued the largest YouTube to MP3 website.  According to the coalition, the website enabled visitors to convert YouTube videos into MP3 audio files whenever they wanted.  The coalition accused Philip Matesanz of multiple types of copyright infringement for enabling stream ripping of YouTube videos.  Labels also claimed that Matesanz profited from the practice.

“Through the promise of illicit delivery of free music, Defendants have attracted millions of users to the YTMP3 website, which in turn generates advertising revenues for Defendants.”

Last Friday, both parties agreed to a settlement.  As part of the proposed agreement, Philip Matesanz would accept the full blame for copyright infringement.  Court documents read,

“Judgment is entered in favor of Plaintiffs and against Defendants on all counts of the Complaint.

“Defendants offer or have ever offered at the website located at www.youtube-mp3.org (the “YTMP3 Website”)), are hereby permanently RESTRAINED and ENJOINED from the each following, anywhere in the world.”

Matesanz will also hand over the site’s name to one of the record labels.

“Defendants are ordered to transfer the domain name www.youtube-mp3.org to the Plaintiff identified in, and in accordance with the terms of, the confidential Settlement Agreement among the parties.”

Should Matesanz fail to turn over the site, the registrar would receive a court order to do so.

The court has yet to sign the proposed judgment as well as the injunction.  In addition, the popular YouTube to Mp3 stream ripping website remains fully operational.  However, once the court signs the agreement, the site will go down.

You can see the proposed agreement and injunction below.