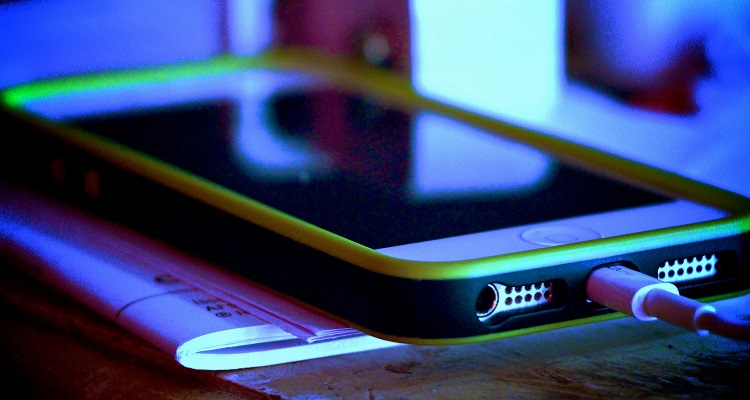 Millions of people use Apple Music on iOS devices.  Now, Apple is planning to dramatically increase that number — and squeeze Spotify in the process.

Apple may convince you to spend up to $1,200 on an iPhone 8.  They also may rope you into an Apple Music account, one that will cost hundreds of dollars over the next few years.  It’s all part of a package that’s seriously starting to gel.

In a new study published by Music Watch, Apple Music is the most popular paid subscription service among iOS users.  However, Spotify Premium ranks as the platform with the most listening hours.

During the first half of 2017, one in five iOS users listened to Apple Music.  At 21%, this number jumped 8% over the same period last year.

Spotify remains popular on iOS devices, though the platform is losing steam.  During the first half of 2016, 10% of users on the platform used Spotify Premium.  MusicWatch noted that while both services saw significant listener gains, Spotify only grew 3% in 2017. 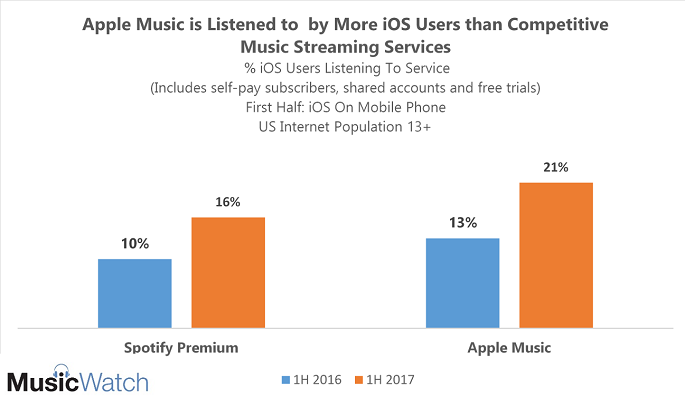 More people engage through Spotify Premium (at least for now).

While one in five iOS users listen to Apple Music, others actually stream more music through Spotify Premium.  Music Watch found that Spotify had the highest share of listening hours among iOS users.

Spotify Premium had a 32% share of music listening hours.  Apple Music came in second with 23% and Amazon Prime Music/Unlimited finished third with 13%.  Pandora Plus or Premium came in last place with 11%. 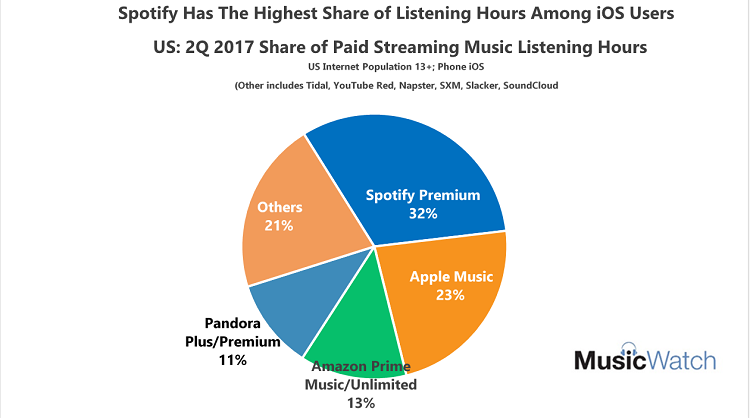 So, Spotify users on the iOS platform spent 40% more time listening to music than Apple Music subscribers.  But why?  MusicWatch hinted at one possibility.  Simply stated, Spotify Premium may be offering better engagement features that iOS users like.  Yes, they’re doing a better job than Apple on its own platform.

That’s a tough pill for Apple to swallow.  But with a possible Apple Music/iCloud bundle on the horizon, the company may have the opportunity to better engage with newer listeners.  That is, if they can convince them to spend $1,000 on a new iPhone.

You can more information on Music Watch’s study here.