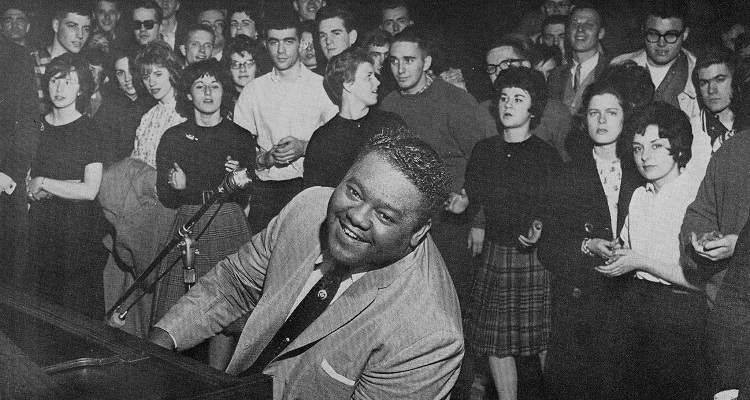 Speaking with local TV station WWL-TV, Domino’s daughter said that the iconic singer passed away Tuesday evening. He died peacefully, surrounded at home by his family.

Who was Fats Domino?

Antoine “Fats” Domino was the youngest of nine siblings.  Born and raised in New Orleans, Domino worked various jobs during his teenage years, including on an ice truck.

Fats Domino spoke Creole French prior to learning English.  His brother-in-law, Harrison Vernett, taught him how to play the piano.  He would soon drop out of school and perform at clubs and bars.

The single would become the first rock and roll record to sell over a million copies.

Another bandleader would later give him his iconic nickname.  In an interview, Billy Diamond explained,

“I knew Fats from hanging out at a grocery store.  He reminded me of Fats Waller and Fats Pichon.  Those guys were big names and Antoine — that’s what everybody called him then — had just got married and gained weight.  I started calling him ‘Fats’ and it stuck.”

Domino’s work would influence other legends in the music industry.  Elvis Presley attributed his music to Domino’s influence.  John Lennon would later say,

“There wouldn’t have been a Beatles without Fats Domino.”

Domino received a Grammy Lifetime Achievement Award in 1987.  Along with Bartholomew, the musician was also among the first inductees into the Rock and Roll Hall of Fame.

President Bill Clinton presented Fats Domino with the National Medal of Arts in 1998.

In addition, Rolling Stone ranked him as the 25th greatest artist of all-time.  The magazine stated,

“After John Lennon and Paul McCartney, Fats Domino and his partner, Dave Bartholomew, were probably the greatest team of songwriters ever.  They always had a simple melody, a hip set of chord changes and a cool groove.  And their songs all had simple lyrics; that’s the key.  There are no deep plots in Fats Domino songs: “Yes, it’s me, and I’m in love again / Had no lovin’ since you know when / You know I love you, yes I do / And I’m savin’ all my lovin’ just for you.” It don’t get no simpler than that.”