Billboard Defends Grammys Chief Neil Portnow: ‘The Recording Academy Can Only Work With the Content It’s Given…’ 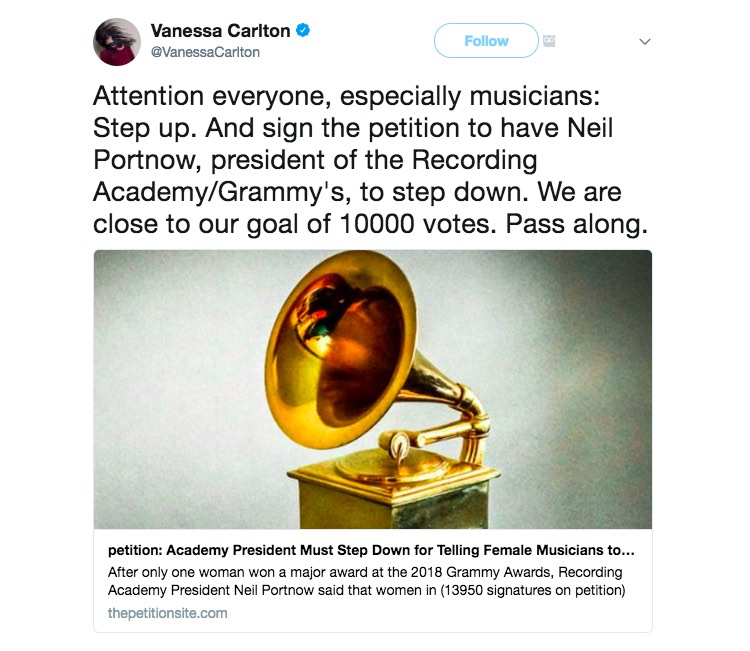 One of many calls for Neil Portnow’s resignation. The petition has now soared past the 10,000 mark.

Grammys president Neil Portnow told women to ‘step up’ if they wanted to win more awards.  Now, Billboard is backing him up.

Is the old guard music industry protecting its own?

That’s the perception this morning as both the Grammys board and Billboard have moved to protect embattled Recording Academy president Neil Portnow.

Since the closing moments of the Grammys, Portnow has been getting broiled for comments that are widely viewed as sexist.  Portnow famously (or infamously) said that women need to ‘step up’ if they want greater recognition from the Grammys and the Recording Academy.

That assertion was shockingly juxtaposed against a major snub for ‘Despacito’.  That track, which is still smashing records, was totally ignored by the Grammys.  The song also happens to have been written by a woman.

Now, it looks like the industry wagons are circling in defense of the down-and-out Portnow.

According to a Billboard piece this morning, Grammys chairman of the board John Poppo views the controversy surrounding Portnow as ‘surreal,’ and pledged his support for Portnow.

“Using the word ‘surreal’ to describe the climate sparked by Portnow’s ill-worded comment about women needing to ‘step up’ and the relative scarcity of women recognized at the Grammys, board chairman John Poppo sent a letter to the trustees in the days immediately following the telecast.  Poppo thanked the board for its leadership and support of Portnow, whose latest contract runs through 2019.”

Unfortunately, Poppo himself may have made a poor word choice, one that may further inflame calls for Portnow’s head.

‘Surreal’ refers to a unbelievable, unreal situation, one that is difficult to connect to reality.  But vocal members of the music industry — including leaders like Michele Anthony, Jody Gerson, and Scooter Braun, among others — have blasted the Recording Academy chief for total insensitivity towards a very real situation.

And, ironically, for being totally disconnected from the realities facing women creators in the music industry.

Enter Billboard, which now seems to be playing the role of Portnow apologist.  And, even echoing the sentiments of Portnow himself by blaming a lack of available women entrants.

The Billboard article, after explaining that Portnow’s job is safe, seemed to solidly side with the Grammy chief.

“But there’s another reason insiders are backing Portnow as criticism flies over the representation of women at the Grammys: The Recording Academy can only work with the content it’s given, accepting entries online from its members and registered media companies, including record labels.”

That statement unfortunately raises another serious question: was ‘Despacito’ not enough ‘content given’?  Maybe the world’s first Spanish-language song to cross into the multi-billions on YouTube (and one billion on Spotify) while smashing cultural barriers wasn’t enough for the Recording Academy to ‘work with’?

Meanwhile, industry critic Bob Lefsetz is stepping up his attacks.

In an email titled, ‘Neil Portnow Must Go,’ Lefsetz called on the industry to keep the pressure on.  And, push Portnow to the curb.

“Let’s not allow them to get away with it. Let’s not let the uproar fade. Let’s keep the pressure on. How are we supposed to have faith in the organization if it can’t clean and take care of its own house?

Portnow has to go.

The rolls must be cleaned.

New members must be signed up.

Transparency must be instituted.

Because although the Grammys always lacked credibility, now they’ve become a joke.”