By the Time You Read This Article, iHeartRadio Will Probably Be Bankrupt 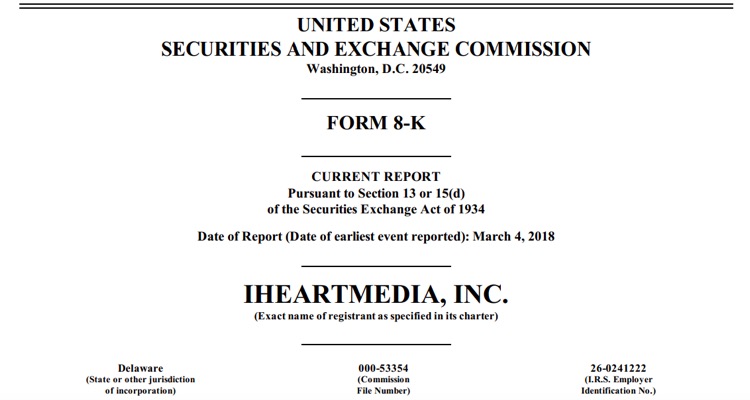 iHeartRadio owner iHeartMedia, Inc. is frantically attempting to renegotiate the terms on roughly $20.6 billion in debt.  That could include a dramatic reduction in financial liability — and a bankruptcy filing that could come as early as Wednesday, March 7th.

The following is a developing story, with hour-by-hour changes.  Please check back for continued updates.

Last year, we warned investors of a near-certain bankruptcy for the highly-leveraged iHeartRadio parent iHeartmedia, Inc.  At the time, iHeartRadio demanded that we change our article, while accusing us of falsely over-dramatizing their financial problems.

Previously, the terrestrial radio conglomerate had been servicing billions in interest payments annually, while somehow running a business with the remaining operational budget.

That wasn’t a fun game, and iHeartmedia simply can’t play it anymore.

Now, iHeartmedia is expected to announce bankruptcy as soon as Wednesday, March 7th, with a negotiated debt package in the works.  The renegotiation is designed to stave off a chaotic process involving the full, $20.6 billion tranche, while boosting the chances of actual payback within a reasonable timeframe.

Of that pile, roughly $15 billion would be forgiven in exchange for serious ownership stakes, a structure that sounds like a deal is in the works.  At this stage, multiple outcomes are possible.  But most likely, a deal will be structured through a bankruptcy filing and managed debt payoffs, possibly involving Liberty Media (more on that below).

Already, a Forbearance Agreement has been submitted.

According to agreement documents filed with the Securities & Exchange Commission (SEC) on Monday, March 5th, the renegotiated debt amount is approximately $5.75 billion.  As part of the plan, iHeartMedia would also spin off Clear Channel Outdoor Holdings.

The Agreement offers a 24-48 hour window of breathing room before creditors start picking this company apart.  Technically, the agreement has a termination time of 12:59 am EST on Thursday, March 8th.

You can read a copy of the 45-page Forbearance Agreement here.

Meanwhile, top iHeartmedia management is rumored to be receiving $15+ million in bonus payments for managing the bankruptcy process, according to Bloomberg.

That includes iHeartmedia CEO Bob Pitman, whose role in this unfortunate meltdown is being sharply questioned.  Pitman would receive a juicy $9.3 million bonus payout for ‘guiding’ the company through the bankruptcy rough seas.

Makes you wonder what the bonus is for not running the company into the ground!

On that note, iHeartmedia has chronically struggled to turn a profit.  The company posted consecutive losses for 27 quarters in a row, a streak that finally ended in the fourth quarter of 2016.  During the third quarter of 2017, iHeartmedia posted a 23.7 percent decline in operating income, with a 1.9% drop in revenue.

Separately, Liberty Media has tendered an initial offer to assist iHeartmedia and assist creditors during bankruptcy (or, near-bankruptcy).

But initial offers were apparently rebuffed by creditors as too low.  We’ve heard this offer was approximately $1.6 billion, for a 40% stake.  Liberty owns a 69% stake in Sirius XM Radio, opening a possible synergy between the satellite radio giant and iHeartradio’s massive terrestrial radio station group.

Earlier, the John C. Malone-controlled Liberty purchased $400 million worth of iHeartmedia debt.  That makes Liberty a very significant creditor, with potential maneuvering through liquidation and insolvency processes ahead.  Liberty appears to be renegotiating following its ‘low ball’ offer.

Interestingly, this is part of Malone’s aggressive playbook.  In an earlier era, Liberty actually bailed out Sirius XM with a $530 million dollar loan.  That gave Liberty a handsome 40% stake, which has now been substantially bolstered.