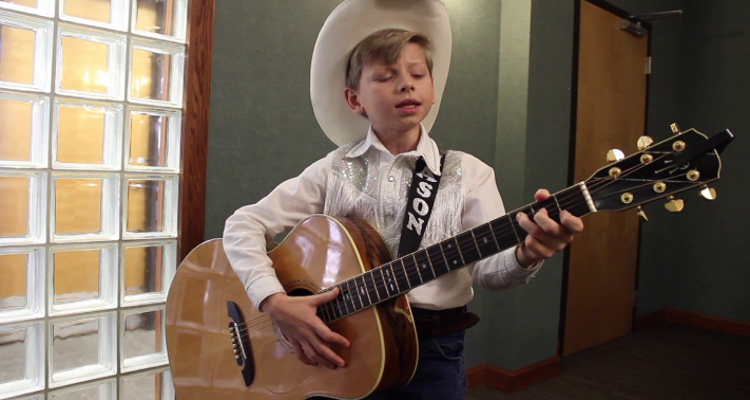 Who would have thought that a little yodeling inside a Walmart could land you a major label deal?  Not to mention gigs at Coachella and Stagecoach, with an intro to Justin Bieber tossed in-between?

11-year-old Mason Ramsey probably never dreamt that his yodeling will bring him fame and fortune, but hey, strange things happen.  A few weeks ago, Ramsey sang his heart out to Hank Williams’ “Lovesick Blues,” complete with the yodeling parts, inside of a Walmart.  The cute-as-a-button clip went viral, and paved the way for a lucrative career.

Ramsey has also performing on shows including Ellen.  His performance in a Wal-Mart parking lot was live-streamed on Facebook for millions.

And the clamor for him to perform hasn’t stopped.  The pint-sized yodeler recently performed at the Coachella Valley Music and Arts Festival, where he performed alongside DJ Whethan.  He actually stole the show, and immediately received a lot of love and appreciation from festivalgoers.

That included Justin Beiber, who not only cheered Mason on, he spent time talking to the viral star backstage.

Perhaps most impressively, Mason Ramsey has inked a full-blown recording deal with Atlantic Records and Big Loud.  The major will release his debut single, and market it accordingly.

At the moment, the momentum is obviously strong.  “Lovesick Blues” has more than 31 million views and counting, and Ramsey just released his long-awaited debut single, “Famous.”   The 11-year old cowboy hat-wearing sensation said, “I’d been to Nashville a few times before, but never thought something like this would happen. It’s a dream to sign with Atlantic and Big Loud. I loved recording ‘Famous’ and can’t wait for everyone to hear it.”