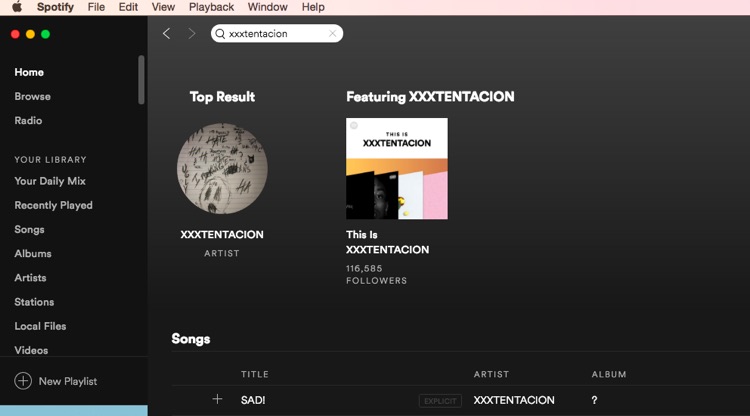 Screengrab of Spotify results for XXXTentacion, May 25th.

A cadre of top rappers — with billions of collective plays  — threatened to remove their content from Spotify over the company’s ‘Hate Conduct Policy’.

Spotify’s wildly-successful Wall Street offering created a billion-dollar company overnight.  But that value is largely based on the artists who license their music to Spotify.

Which means rappers, among the most popular artists on the platform, have a huge amount of power in this equation.  Now, it looks like they’re using it.

According to multiple sources speaking with Digital Music News, a number of top rappers loudly protested Spotify’s ‘Hate Conduct’ pulldowns.  At least three of those protesters outright threatened to remove their content in direct protest of the policy, with Kendrick Lamar noted as one of the protesters.

Lamar, one of the most popular artists on Spotify, has racked up billions of plays on the platform.

We’re not clear on how serious those threats were.  But Spotify appeared to be taking them very seriously.

Those are certainly strong charges, though they were rooted in playlist pulldowns that almost exclusively targeted black performers.

Specifically, Spotify targeted a major rapper to kick off its moral crackdown, with no warning.  The affected rapper, XXXTentacion, is currently battling allegations of violence against a pregnant woman, among other charges.  Accordingly, his music was abruptly removed from Spotify’s ‘Rap Caviar’ playlist, with other playlists also potentially affected.

Importantly, XXXTentacion, whose real name is Jahseh Dwayne Onfroy, has not been convicted of a crime.  That makes Spotify a strange judge, jury, and moral executioner, with a decision based on existing charges.  And Judge Spotify’s first ruling caused significant damage: the XXXTentacion yank, which happened without warning, is estimated to have cost the rapper an estimated $60,000 per year.

Also yanked: R. Kelly, one of the most successful African-American entertainers of all time.  Strangely, no white musicians were removed from playlists, inviting the charges of racism.

“It’s racist,” one manager flatly relayed to DMN.  “That’s just the way it looks from over here, alright?”

But beyond the charges of racism was a lingering fear that any rapper could find themselves censored by Spotify — at any time, without warning.  And the reason is obvious: rap is notoriously raw and unedited, and the last thing rappers want is a platform with a PG-13 moral police force pulling their content.

“Am I next, is that [rapper] next?” one source shared.  “You know a lot of people had to be asking that.”

Just last night, Spotify started making moves to reverse the policy, with XXXTentacion expect to regain his coveted Rap Caviar slot.   Now we have a pretty good indication of why that happened.

The rapper protests were largely funneled through managers or business representatives, according to our sources.  And one of the first people contacted may have been Troy Carter, a top Spotify executive with innumerable creative contacts.  Carter is the former manager of artists Lady Gaga and Eve, among others.

The rapper pushback probably prompted Carter to aggressively counter the ‘Hate Conduct’ pulldowns.  Carter’s angry opinion quickly leaked to the media, with some reports suggesting that Carter was ready to walk if the policy wasn’t dialed back or seriously rethought.

Carter quickly retreated from that stance, possibly because of assurances that Spotify’s moral crusade would be paused.

Meanwhile, Spotify ‘fixer’ Jonathan Prince is catching some serious flack for the misstep.  Prince reportedly triggered the ‘Hate Conduct’ policy in response to heated demands to take action against R. Kelly.  Seeing a bigger opportunity to align Spotify with the #MeToo movement, Prince inadvertently created a giant PR mess — though ironically, Prince was hired to help Spotify manage crises, not create them.

As of Friday afternoon, XXXTentacion’s music still hasn’t been restored to Rap Caviar or other playlists.  But we’re hearing that reinstatements are quietly being made.