Ugly Emails Surface Between MSG and the Recording Academy 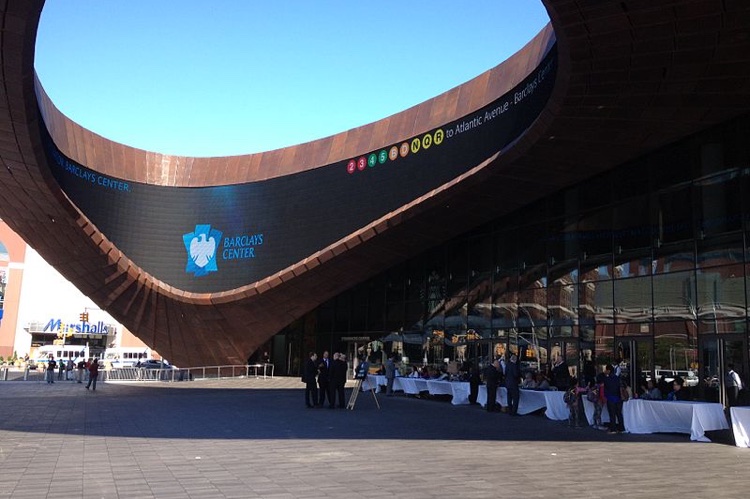 Barclays Center in Brooklyn, which apparently offered a sweetheart deal to Musicares for its ‘Person of the Year’ fundraiser (photo: Darkhunger CC 3.0)

Did MSG bully the Recording Academy into squandering millions on its recent Musicares ‘Person of the Year’ event?  That’s the allegation from Billboard, which has unearthed some ugly emails.

The Recording Academy is saying goodbye to longtime CEO Neil Portnow.  But getting rid of a simmering controversy related to last year’s Grammys and its charitable organization, Musicares, is proving more difficult.

Now, new emails published by Billboard are intensifying the controversy.

Instead of a successful celebration in New York, this year’s Grammy Awards quickly turned into a radioactive nightmare.  An embarrassing lack of awards for women immediately sparked protests, and the Recording Academy — which oversees the event — poured gasoline on the fire.  Just moments after the event wrapped, Neil Portnow told women to ‘step up’ if they wanted better awards representation.

Portnow survived the controversy, despite widespread calls for his resignation.  But his recent decision to step aside followed another scandal, specifically involving allegations of financial mismanagement surrounding Musicares.

In a scathing letter from an ex-employee, Portnow was accused of diverting millions from the charity to cover huge budget deficits related to the Grammys event in New York.  The staffer, Dana Tomarken, was quickly dismissed as a disgruntled ex-employee who apparently mismanaged funds of her own.  But Tomarken fired back, pointing to a technicality and honest mistake involving a Musicares auction item — while also claiming wrongful termination.

Into that soup, Billboard is unearthing some damning emails related to the Recording Academy’s decision to host its ‘Person of the Year’ event at Radio City Music Hall instead of Barclays Center.  In the end, the Academy may have been bullied into losing millions in charitable donations.

In details recently reported by Billboard journalist Dave Brooks, the Recording Academy was offered a sweetheart deal by Barclays, while Madison Square Garden expressly prohibited a deal with the Brooklyn venue.

Fisher apparently threatened to “kill the entire deal” involving MSG if MusiCares held its ‘Person of the Year’ at the Brooklyn space.  “Please confirm no Barclays. Thanks,” Fisher signed off — in writing.

Back to Tomarken, who says she was negotiating a deal with Barclays that was millions less than Radio City Music Hall.  Billboard says that Barclays was willing to forego rent, share proceeds from suite rentals and other revenue-generators, and even join forces with its own charity to raise more cash.

Barclays confirmed that it was aggressively bidding for the event.

Sounds like a plum deal, though it’s unclear whether guests would want to shuttle over to Brooklyn for the event.

Tomarken lost the battle for Barclays, with Radio City Music Hall grabbing the event.  But according to Billboard, that came with a huge price tag.  “The event, which was held eight months later at MSG’s Radio City Music Hall and allegedly netted $1 million from a $7 million gross for the beloved music industry charity — down from a $5 million profit in 2017,” Brooks noted.

“The funds raised by the MusiCares benefit were ultimately hampered by soft ticket sales, theater seats instead of banquet tables and less space than usual for its lucrative live auction, but an Academy spokesman says there was no reason to conclude that Barclays would have been a better or more profitable choice,” Brooks continued.

But Brooks has been peeling back a few more layers, suggesting that Azoff MSG Entertainment and Oak View Group topper Irving Azoff applied similar pressure to keep Barclays at bay.  Azoff’s office has denied any muscling, pointing to a simple deal with Radio City and an internal disagreement at Musicares.