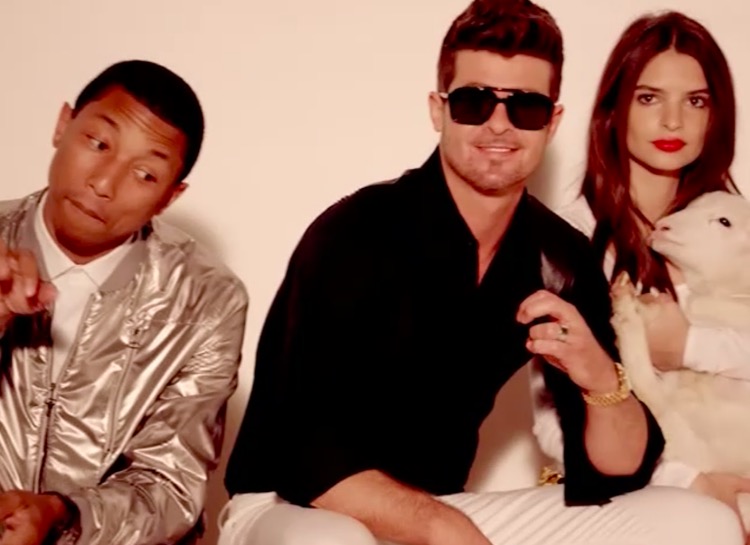 Pharrell Williams, Robin Thicke, and Emily Ratajkowski in the racy video for ‘Blurred Lines’. Ratajkowski is rumored to have confused the track for Marvin Gaye’s ‘Got to Give It Up’ in a club.

It’s easily one of the most controversial music copyright cases of the year — if not decade.  But will the ‘Blurred Lines’ copyright verdict really create a ‘chilling effect’ for songwriters and music creativity?

The following is part of an in-depth interview Digital Music News conducted with Richard S. Busch, the attorney who represented the Marvin Gaye Estate in its successful litigation against Pharrell Williams and Robin Thicke, authors/performers of ‘Blurred Lines’.  The full interview is on the Digital Music News Podcast — and embedded below.  We hope you’ll subscribe for more ahead (on iTunes, Spotify, Google Play, Stitcher, or anywhere else).

It was a verdict met with howls of protest from leading musicians, all of whom warned that a decision against ‘Blurred Lines’ and its authors would seriously chill songwriting creativity.  Ahead of a shocking, multi-million dollar award to the Marvin Gaye Estate for massive copyright infringement, famed songwriters and composers like Hans Zimmer, Jennifer Hudson, Daryl Hall of Hall & Oates, and more than 200 others urged the Ninth Circuit Court of Appeals to strike the ruling down.

That didn’t happen, which led to a palpable sense of dread within the music industry.  The problem, according to the protesting group, is that ‘Blurred Lines’ isn’t technically a copy of Marvin Gaye’s ‘Got to Give It Up,’ even though they sound very similar.

“The verdict in this case threatens to punish songwriters for creating new music that is inspired by prior works,” stated Ed McPherson, who authored the artist protest.  “All music shares inspiration from prior musical works, especially within a particular musical genre.  By eliminating any meaningful standard for drawing the line between permissible inspiration and unlawful copying, the judgment is certain to stifle creativity and impede the creative process.”

Indeed, a sense of dread quickly permeated the corners of the music industry.

But will this ruling ultimately chill songwriting creativity, and unleash an avalanche of unmitigated lawsuits against similar-sounding songs?

Not according to Richard Busch, who defiantly represented the Gaye Estate in the case.  According to Busch, there are numerous ways to infringe upon a work, even if the key signature and specific notes are different.  And when it comes to comparisons, there are many elements that were unfairly lifted from Gaye’s classic 70s work.  He also pointed to musicologists who painfully drew the parallels of plagiarism.

That’s been sharply contested, of course.  But when these two songs are played back-to-back, they do sound shockingly similar (take a listen below).

Just last month, the Ninth Circuit officially published its ruling on the matter, effectively closing the case for good.  Now, the fear is that this case will only open new ones, even for songs that haven’t yet been written.  But according to Busch, the industry should be a lot less worried than they are.