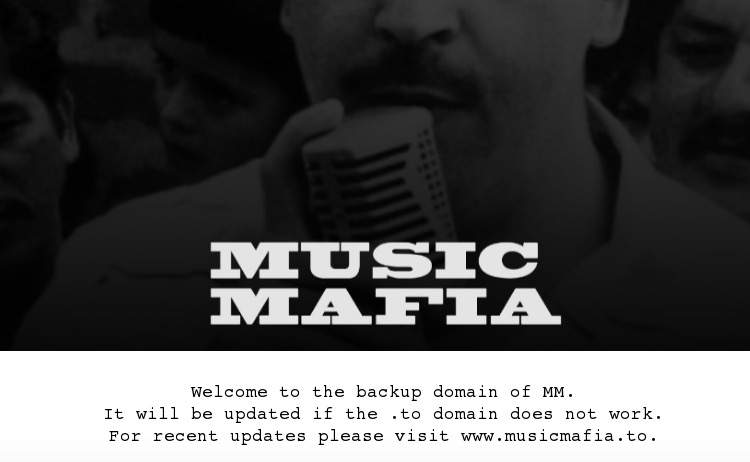 The notorious music leaking site Music Mafia is still online, despite heavy pressure from the RIAA to reveal the identity of the site’s owners.  Ahead of a possible shutdown, a backup destination has already been created.

Music Mafia (musicmafia.to) has been generating money from passionate music fans by offering unreleased music from various artists.  Prices range from 0.05 BTC ($300) up to 0.45 BTC ($2,900) per song.

Payments can only be made in cryptocurrencies like Bitcoin, to protect the identity of the site owners.

A cursory glance at their musicmafia.to domain shows Kanye West’s “Only,” Travis Scott’s “Up Top,” and dozens more unreleased songs available for purchase.  The group is now alerting users of a newly-launched .biz domain, likely because of a subpoena issued to the domain name registrar behind the .to domain.

We reached out to the Tonic domain registrar to ask about the recent subpoena.  But the registrar was not willing to comment on the current legal proceedings.  At this stage, all we know is that the subpoena has been served.

“With reference to your recent inquiry, we must advise that Tonic is not prepared to make any comment in connection with matters subject to current on-going legal proceedings,” the company told Digital Music News.

When doing a WHOIS domain lookup for the newly advertised .biz domain, no information could be found.  The identity of the person or persons responsible for the Music Mafia site has been shrouded in mystery since the group offered unreleased Kanye West material for sale for BTC in 2017.

Because the group accepts the anonymous digital currency, groups like the RIAA are having trouble cracking down on them.

The recent subpoena is an attempt to get information out of the registrar, but even if Tonic turns over their domain records, it’s possible they’ve been falsified to protect the site’s owners.

The group has absolutely no social media presence, and informs potential customers of that fact on their website.  Most likely, the people behind the site will remain anonymous, though the RIAA could pursue a ‘John Doe’ filing against the site in the hopes of terminating future TLDs.

Music Mafia’s piracy model revolves around crowdfunded donations and bidding for unreleased tracks.  The group tries to reach a certain contribution threshold or winning bid before releasing a track.  So far, it’s unclear how much money the site is actually making.

The presence of numerous juicy pre-release leaks is fueling the rumor that someone inside the music industry is connected to the site in some way.

That rumor was fueled last year when Drake’s official Twitter account linked to the music site before it was quickly deleted.