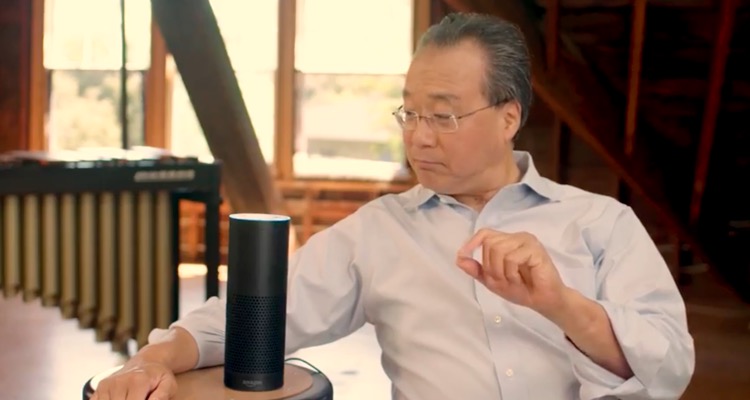 Should Spotify and Apple Music be very, very afraid?  Amazon is now aiming to crack Spotify and Apple’s lead in music streaming through a new marketing blitz featuring Alexa and famous musicians.

Alongside a major advertising campaign for its Alexa and Amazon Music Unlimited services, the company has just announced a new Alexa experience featuring the renowned cellist, Yo-Yo Ma.

Mr. Ma is the host for 36 short episodes for Alexa users, one that takes them on a journey through the classical compositions of Johann Sebastian Bach and the recently-released album, Six Evolutions — Bach: Cello Suites.  Amazon says the content will be available as an Alexa skill and the Classical Flash Briefing on any Alexa-enabled device.

The crafty tie-in comes less than 24 hours after Amazon promised a serious marketing blitz for its streaming music properties.  That push will revolve around a key advantage: voice-enabled interaction, with Alexa holding a huge lead in the space (and Spotify carrying virtually zero position in it).

The idea behind the content is to provide anyone who is curious about classical music with a guided tour of one of the most prominent classical composers of our time.

It’s hosted by a world-renowned cellist who has dedicated his life to classical music.  Fans of classical music can activate the skill by saying, “Alexa, open Yo-Yo Ma’s Musical Moments.”

Yo-Yo Ma’s latest album debuted on August 17th and is the cellist’s third recording focused on Bach. Much like Bach himself, Yo-Yo Ma was a child prodigy and began performing at age 4. He has produced more than 90 albums of classical music and has received 18 Grammy Awards over his 58-year career.

His most famous instrument is a Montagnana cello that was crafted in 1733 and is reported to be worth around $2.5 million (pro-tip: don’t check that into baggage).

And Yo-Yo Ma is likely the first of a flurry of upcoming musicians to be featured by Amazon, with Alexa a core component.

Of course, that’s no accident.

Amazon’s Alexa continues to be the world leader for smart speakers, with more than 25 million sold as of 2017.  That install base is expected to grow to more than 50 million over the next few years, as Canalys estimates the smart speaker market will increase to more than 300 million devices by 2022.

Here’s a little intro to the Bach-intensive series.