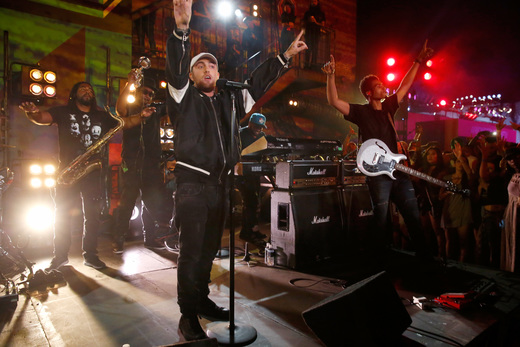 Rapper Mac Miller has died of an apparent drug overdose.

According to information reported by the Los Angeles Times, Mac Miller was found unresponsive in his home in Studio City, a community within Los Angeles.  The police department responded to the call at the 11600 block of Valleycrest Road, which corresponds to Miller’s residence.

“Officers went to the scene for a death investigation,” the LAPD confirmed.  Shortly after the visit, police offers turned the body over to the LA Coroner’s office for a full autopsy.

At this stage, an official cause of death has not been issued.  Given that the death occurred just hours ago, the family has not issued a statement.

Updated: Mac Miller’s family has now issued a statement, but declined to discuss details of the death.

“Malcolm McCormick, known and adored by fans as Mac Miller, has tragically passed away at the age of 26.  He was a bright light in this world for his family, friends and fans. Thank you for your prayers. Please respect our privacy. There are no further details as to the cause of his death at this time.”

It can often take weeks before an autopsy is released.

Miller was rumored to have battled with addiction issues, though the rapper denied that a serious problem existed.

“If a bunch of people think I am a huge drug addict, OK. Cool. What can I really do? Go talk to all those people and be like ‘Naw man, it’s really not that simple?’” Miller told Rolling Stone last month.

The real story seemed a bit different.   The experimental rapper had admitted to a dependence on ‘lean,’ which is a potent mixture of codeine and promethazine.   Lyor Cohen, currently head of YouTube Music and a longtime figure in the rap community, has dubbed lean as ‘liquid heroine’.

The rapper’s two-year relationship with Ariana Grande was also rumored to have ended because of drug and alcohol issues.  Grande herself admitted that she was reduced to playing the role of babysitter.

“I am not a babysitter or a mother and no woman should feel that they need to be,” Grande tweeted. “I have cared for him and tried to support his sobriety and prayed for his balance for years (and always will of course).”

Earlier this year, Mac Miller smashed his Mercedes G-Wagon into a telephone pole near his Studio City home.  Miller fled the scene, and was ultimately charged with DUI.

The singer certainly didn’t look like a drug addict.  The artist was actively touring, recording, interviewing, and having fun, though perhaps one lethal injection is all it takes.  And his creativity seemed ebullient and unstoppable.

Born in 1992, the Pittsburgh rapper was inked to Rostrum Records, the label of another big-time Pittsburgh personality, Wiz Khalifa.  Initially called ‘EZ Mac,’ McCormick quickly captured a following in the early 2010s, with rap blogs gravitating towards the light, creative, experimental rapper with offbeat lyrics and live instruments.

Miller was apparently preparing to shoot a music video before his untimely death.  Perhaps this was one of his funniest videos — though eerily, it was released years before the 2016 election.