Spotify’s Stock Crashes Below $120 for the First Time Ever — $14.2 Billion In Market Cap Lost In 5 Months 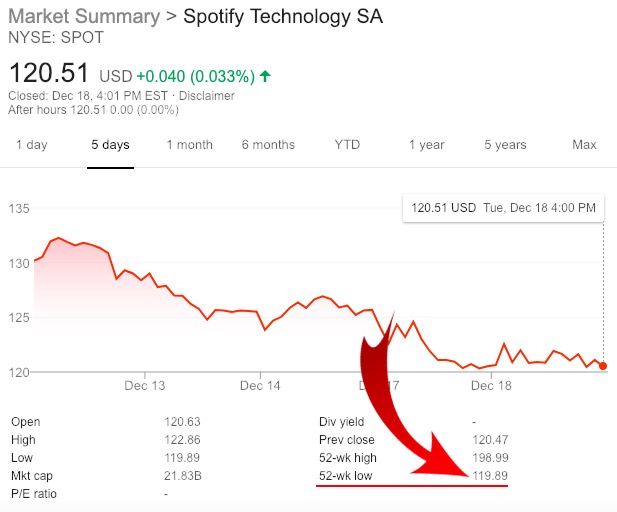 Update 12/19: Shares of SPOT have sunken further in Wednesday trading, bottoming at $115.86.  We’ll have more coverage ahead.

Shares of Spotify (SPOT) crashed to another all-time low in Tuesday trading, with a sub-$120 valuation briefly brushed.  By the Wall Street bell at 4 pm ET, SPOT was resting at $120.51, barely above the $120-mark.

The continued crash means that SPOT has shed approximately $14.2 billion in market valuation since its late-July peaks.  At that stage, bulls were calling for a serious surge above $200, especially as shares approached $199. But Spotify’s all-time high remains $198.99, while a sub-$100 future is now entirely plausible.

Broader U.S. equity indexes hit their lowest levels in 14 months on Tuesday, thanks to concerns related to rising interest rates, a lingering trade war, and a looming government shutdown.  But those broader concerns are forcing investors to focus more on fundamentals, including details like profitability — or even the chance of long-term profitability.

At this stage, Spotify definitely lacks the former — and it’s unclear if they can achieve the latter.

Indeed, that level of scrutiny has proven costly for Spotify, as frothy hype is transitioning towards more solid bets.  Still, price targets are yet to tank.  According to MarketBeat, Spotify’s average price target remains at $200, with a majority of analysts still bullish on the stock.

Of 32 analysts covering the stock, MarketBeat finds that 24 still rate SPOT a ‘buy’.  Just one analyst is rating the stock a ‘sell’ at this stage.  “Their average twelve-month price target is $200.2593, suggesting that the stock has a possible upside of 66.18%,” MarketBeat notes.

Complicating matters is Spotify’s heavy holdings in Tencent Music.  As part of an equity swap between the streaming companies, Spotify gained 8.5 million shares of the future TME, with a fair market value assessed at $6.52.  That means that Spotify’s TME holdings are still in the black, but just barely.  As TME threatens to dip into the single-digits, the value of Spotify’s holdings could easily slip into negative territory.