Thanks to Marc Jacobs, Nirvana’s not smiling anymore.

Marc Jacobs has willingly stolen a happy face from Nirvana.  Unsurprisingly, the group’s unhappy about it.

So, the surviving members of the iconic alternative rock grunge band have taken the clothing brand to court.

Nirvana first filed for and obtained the trademark for a similar smiley face design in 1992.  So, the group claims Marc Jacobs’ ‘Bootleg Redux Grunge’ has ripped off their iconic design.

One key difference exists between both designs, however.  Marc Jacobs has simply replaced the group’s X eyes with M and J. 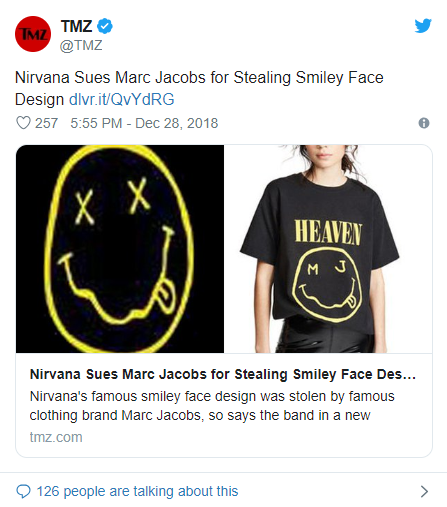 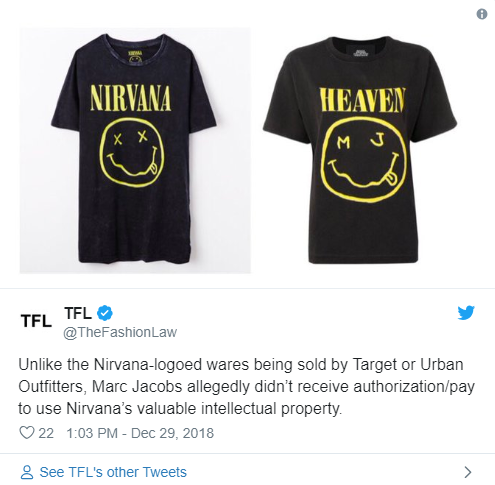 “[Nirvana] licensed its copyrighted logo on literally dozens of different t-shirts, shirts, hats, hoodies, bags, backpacks, glasses, wallets, and other items of merchandise, many of which have sold extensively for decades.”

Nirvana owns a valid US copyright for the ‘Smiley Face’ design and logo.

Despite outright publicizing and promoting clothing with the logo, Marc Jacobs has never received authorization or paid a license to use the design.

Second, the clothing brand has outright infringed on the Lanham Act.

The Bootleg Redux Grunge line may confuse consumers, as Nirvana has never associated itself with Marc Jacobs.

In fact, not hiding the outright bootleg nature of the piece, the shirt’s online description reads,

“This exclusive piece from the 1993 Grunge collection was created by Marc Jacobs during his time at Perry Ellis.  This bootleg smiley tee sure smells like teen spirit.”

First, the court should prohibit the clothing brand from selling any product or service featuring the band’s design.

Second, the court should prohibit the clothing brand from distributing, marketing, advertising, licensing, or implying Nirvana’s endorsement of the Smiley Face design.

Third, the court should require Marc Jacobs to remove its design from the internet and all distributed promotional materials.

Fourth, the court should force the clothing brand to account for all revenue received from the unauthorized misappropriation and infringement of the group’s copyright and trademark.

Fifth, the band should recover a money judgment reflecting compensatory and general damages.

Eight, any other action the court deems just and proper.