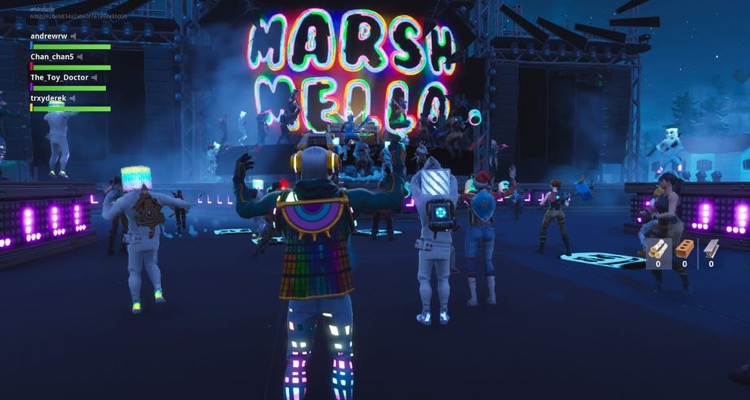 EDM producer Marshmello held the most massive in-game concert in Fortnite over the weekend.

The concert was held entirely within the Fortnite universe, with Marshmello’s digital re-creation live on stage for all players to see and experience.

All connected players were transported to a huge virtual stage where Marshmello performed a 10-minute set for millions of players. Fortnite’s map limitation of 60 players saw thousands of individual matches attending the virtual concert.

Epic’s newly launched special game mode prevented players from slaughtering one another while enjoying the show.  A respawn mechanic allowed players to respawn if they were somehow killed despite weapons being disabled.

The in-game stage came to life with tons of fireworks and visual effects, with Marshmello at the center.

The virtual stage also performed some feats that simply wouldn’t be possible in a real-life concert.

At one point, the stage altered the gravity present in the game, sending players into the sky as the stage joined them. Most players enjoyed the experience by using the in-game emotes to dance along to the set.

However, as soon as the set ended and the restricted rules were up, the concert turned into a free-for-all slaughter between the two sides.

The concert was held in-game at Pleasant Park and was teased for several days on social media. Marshmello promoted the gig on his real-life tour schedule and on posters featuring his in-game avatar.

The Marshmello skin, glider, and emote pack were also added to Fortnite for purchase. This concert also begs the question if Marshmello was paid a commission on the sale of these items. If so, why aren’t all the rappers who have had dances featured in the game getting paid too?

You can bet that plenty of people purchased the micro-transactions featuring Marshmello merch.

It’s hard to imagine the artist wouldn’t get a piece of that revenue given his active promotion of the event. If concerts can be held at virtual venues reaching millions of game players across the globe, that changes the face of music concerts as we know it.

Once upon a time, virtual performances were the stuff of impractical startups and vomit-inducing headsets.  Now, VR performances and in-game performances like these are bringing music concerts to life in the living room — with serious participation and enjoyment.