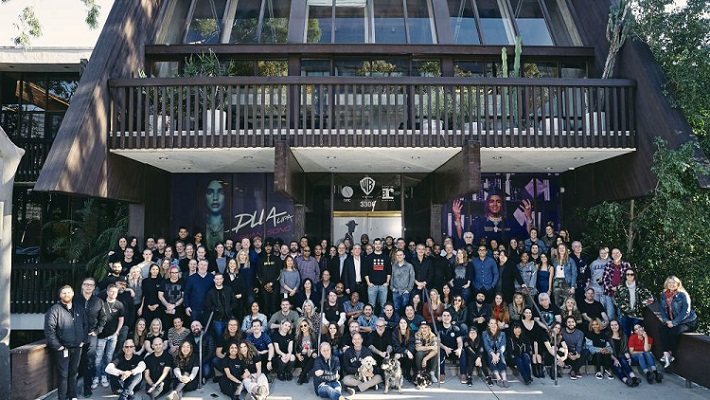 Yesterday, Warner Bros. Records bid farewell to its former home at 3300 Warner Blvd. in Burbank, California.  The location had served as the label’s HQ since 1975.

The move marks the first time that WMG’s west coast teams will work under a single roof.

Located at 777 S. Santa Fe Avenue, the historic building will feature recording studios, artist lounges, and custom-designed offices.  Originally, the building was built as a factory and showroom for Ford’s Model T in 1912.

WMG celebrated by throwing “a week’s worth of festivities” which ended Wednesday night.

Speaking about his time working at the ‘ski lodge,’ Lenny Waronker, President and Head of A&R at Warner Bros. Records, explained,

As he cleared out his office, Rick Gershon, the label’s Vice President of Publicity, added,

“From the first time I bought a Small Faces album at College Records in Northridge, I noticed the palm trees on the label and realized there was a record company in the Valley.”

Longtime label executive Bob Merlis, who left the company in 2001, reflected on his time at the former building.

“I actually never heard this building referred to as the ‘ski lodge’ until much later.

Concluding his experience at the ‘ski lodge,’ he said,

“I lived at 3300 longer than anywhere else in my life.  When you’re with an organization recognized as the hippest and most respected, you can feel that esprit de corps.  There was a real difference back then between Warner Bros. Records and everybody else.”