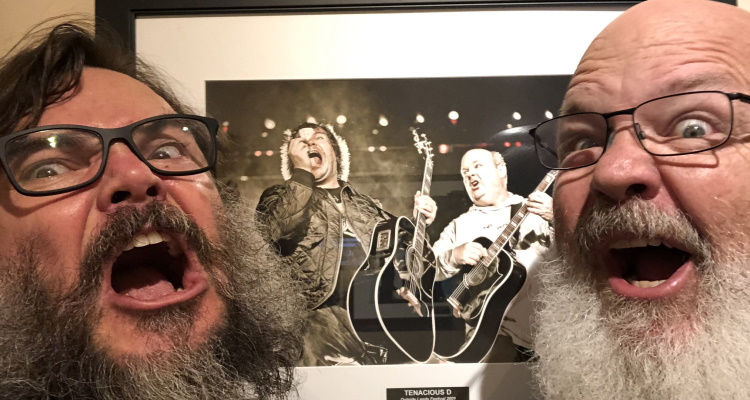 Jack Black and Jack White have teamed up for a legendary collaboration.

Jack Black shared the news on Twitter, posting a picture of himself with Jack White. The duo recorded the new song at White’s home in Nashville.

In a video released on his JablinskiGames YouTube channel, he called it a “legendary collaboration.”

The 17-minute video features highlights from the Nashville leg of the Tenacious D tour. The video also includes some behind-the-scenes footage from their Lollapalooza set in Chicago.

In the video, Black gushes about White’s house saying,

“I’ve never seen so many cool antique toys. It’s what you would expect: Jack White’s house is gonna be off the chain. I’m still floating on Cloud 9. I think our song is kickin’ chicken too —it’s a stone-cold jam.”

Black revealed that the musical partnership came about following the Tenacious D concert at Lollapalooza. White gave Tenacious D a tour of his Third Man Records headquarters, which is part recording studio and part museum.

No cameras were allowed, and the collaboration was not shared, so it’s a mystery what the song sounds like. At one point, Jack White deadpans at the camera, stating that Tenacious D are “very mean guys.”

“We just finished recording a new song at Jack White’s home studio. I wish you could have been filming because it was magical. Me and KG kicked out the jams. In record time — that was a really fast recording session.”

Black confirmed the song was recorded on an 8-track.

Tenacious D recently wrapped up a seven-city American tour that included stops in Denver, Atlanta, and Nashville. Their latest album Post-Apocalypto dropped last year. You can check out the full tracklist for the album on Spotify.