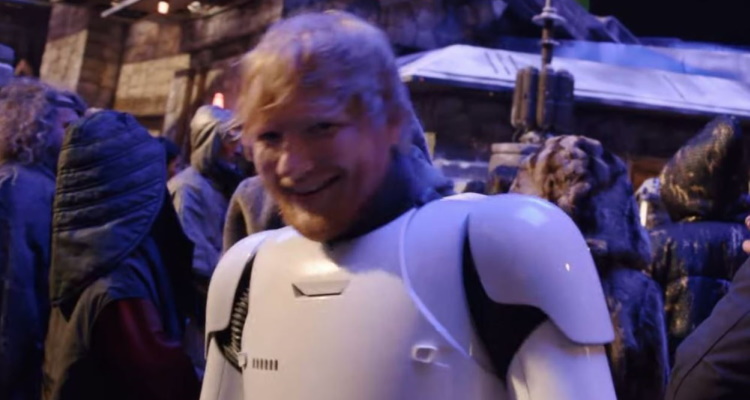 A new special look teaser for the latest Star Wars film gives us a peek at Ed Sheeran and Lin-Manuel Miranda.

The Star Wars movies are well-known for their celebrity cameos and The Rise of Skywalker will be no exception. A special look teaser revealed Ed Sheeran will play a storm trooper in the upcoming movie. Lin-Manuel Miranda appears to be a Resistance member.

Fans thought the ‘Game of Thrones’ cameo was jarring, but it didn’t sit well with a one of the actors, either. In fact, that cameo was so ill-received, Sheeran ended up deleting his Twitter profile after fan backlash.

A behind-the-scenes look at that show revealed Sheeran’s appearance was on behalf of Maisie Williams.

Co-creator David Benioff revealed that the crew wanted to get Sheeran on board since Williams was such a fan.

“Ed Sheeran’s got a beautiful voice and we knew he was a fan of the show. We knew that Maisie was obsessed with him, so we always thought it would be fun to try to get him into a Maisie scene at some point.”

At least Star Wars fans won’t have to worry about seeing a Lannister soldier since storm troopers are faceless by design. ‘Star Wars: The Rise of Skywalker’ will release on December 20 in the US. A representative from Disney cautioned that neither cameo is guaranteed to appear in the new film.

But at least one other celebrity cameo in the Star Wars films includes Daniel Craig as a storm trooper in The Force Awakens. The special look teaser first aired at the American Music Awards on Sunday night.