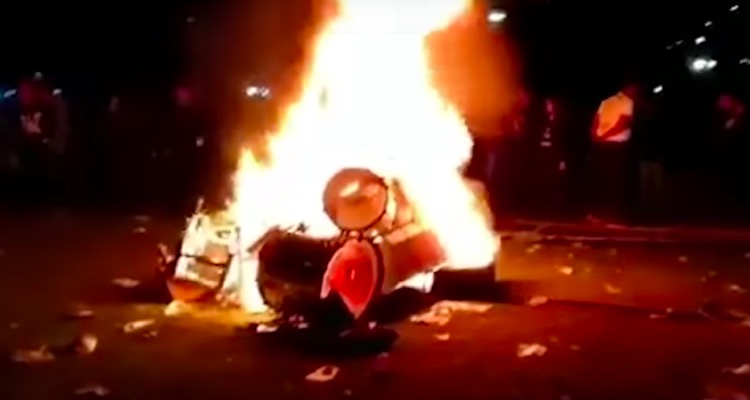 Slipknot and Evanescence decided to abruptly cancel Knotfest in Mexico City because of problems with a security barricade.  Which turned out to be a very, very bad idea.

Abruptly canceling a major performance in front of 50,000 fans is rarely a good idea — especially if your band happens to be Slipknot. But that’s exactly what happened over the weekend at Knotfest in Mexico City, where Slipknot decided to flat-out cancel their Saturday night performance moments before showtime because of issues with the security barricade.Apparently the barricade that separates fans from the band had ruptured, and couldn’t be adequately repaired. Here’s how the band explained it on their website the following morning.

“Because of a broken barricade and failed attempts to fix it, Slipknot were forced to cancel our performance last night. Safety – especially the safety of our fans and fellow bands – is priority number one. We apologize profusely and hope you all understand. If anything were to happen to ANY of you, we wouldn’t forgive ourselves. Also, if we could have fixed the barricade correctly, we would have gone onstage. Again, we hope you understand and we will try to make it up to you as soon as we can.”

Unfortunately, a group of militant fans didn’t ‘understand’ the situation.

Instead, a group of angry ticketholders smashed past the broken barrier and started destroying things. That included Evanescence’s drum kit, which was turned into kindling for an on-stage bonfire.

Slipknot also suffered some pretty serious equipment damage. It appeared that anything left on stage ahead of the scheduled show was subject to the pillage, especially hard-to-remove instruments like speakers and the drum set.

Sadly, Slipknot and Evanescence were unable to schedule a make-up show on Sunday, because their gear had been destroyed.

“We had hoped to perform today, but regrettably, a situation arose onstage after the cancelation that damaged or destroyed gear that would have been necessary to play,” Slipknot tweeted on Sunday.

Evanescence said the chaos was provoked by a small ‘handful’ of fans.

“Even though we are devastated by the destruction of our instruments and gear, we do not see the violent end to last night as a representation of our Mexican fans, or the Mexican people,” the band stated on Facebook. “50,000 people were there, and sadly a handful of them turned to anger and violence after the cancelation. You have shown us an incredible amount of love from the very beginning, and we will always come back for you.”